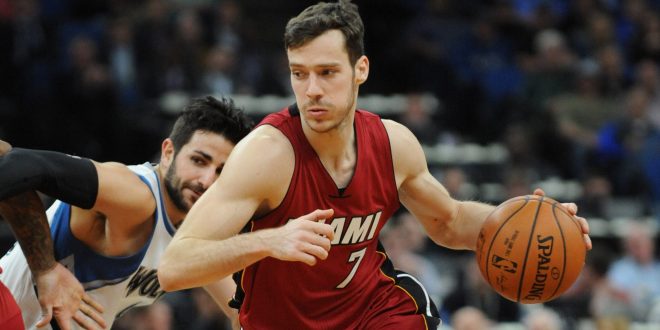 Miami Heat Make It Eleven In A Row

The Miami Heat are red hot right now. Last night the team traveled into hostile enemy territory for a game against a young, talented Minnesota squad. The team emerged victorious, extending their winning streak to 11 straight games. After last night, Miami holds the longest win streak in the NBA. It was a battle of two young teams who were both hungry for the win. However, the Timberwolves weren’t able to stop the Heat and their momentum.

The Heat rallied behind Dragic’s spectacular play. He had a career-high 33 points. The guard made himself comfortable shooting from beyond the arc, as he knocked down 7 of 9 three pointers. While he shouldered the offensive load for Miami, he also added 9 assists. Dragic was only one more dime away from a double-double. Head coach Erik Spoelstra says that Dragic’s play really set the team up down the stretch.

"It's an old saying but we have to keep taking it 1 day at a time. We have to have fun and enjoy this ride." -Dionhttps://t.co/KyezN1Qegz pic.twitter.com/IMXqX0FHto

Along with Dragic, the Miami’s star center Hassan Whiteside had a great day against the Timberwolves. He had 19 points, and grabbed 13 rebounds. Whiteside said that the team came in with a mental toughness and it helped them score the win.

The team played well as a whole to come out on top in a game that was close until the last seconds of the game. Guard Dion Waiters played well on both ends of the floor. He had 12 points, 3 rebounds, 5 assists and 2 steals. Meanwhile, young guard Rodney McGruder continues to play well for his team. The rookie logged nearly 40 minutes for his team. McGruder put up 15 points, 5 rebounds and 4 assists.

Miami continues to find ways to win against tough teams. It’s their non-selfish mindset that is allowing them to keep adding to their streak. While the Heat certainly has star power, any one of their players can take over any given ball game.