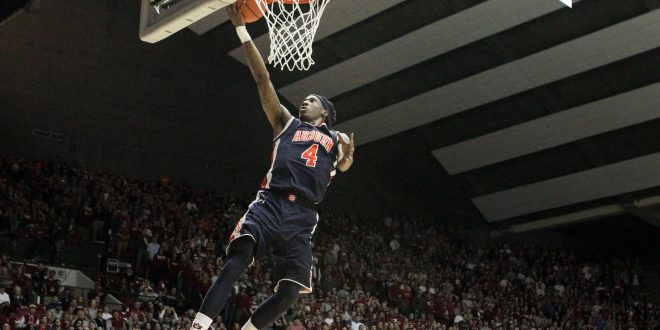 Coming off a five-point win against the Tennessee Volunteers on Saturday, the Mississippi State Bulldogs Men’s Basketball team travels to Alabama to release their leash again with a potential “W” against the Auburn Tigers on Tuesday at 9 p.m.

While the Bulldogs defeated the Volunteers 64-59 on Feb.4, the Tigers lost to Tennessee on Jan.31 by 10 points with a final score of 87-77.  The (15-8) Auburn Tigers have a 4-6 conference record, and the (14-8) Mississippi State Bulldogs have a 5-5 conference record. Auburn Head Coach Bruce Pearl said what he expects from the Bulldogs offense.

“They had a great win Saturday,” Pearl said. “They have come from behind four times now trailing by 10 points or more, which tells you a little bit about their character and the weapons they have offensively.

Needless to say, tonight should be an SEC battle against the two teams.

Although the Tigers did not defeat Tennessee, they are coming off of a win of 82-77 to their big rival, the Crimson Tide. During Auburn’s game against Tennessee, the Tigers struggled to pass the ball down low to freshman center #50 Austin Wiley . This pattern continued into their game against Alabama and led to opponents receiving quick turnover points.

Auburn was able to figure it out in their game again  percent of his 3-point shots and 50 percent of his 2-point shots resulting in 15 points. In regards to assists, T.J. Dunans, Ronnie Johnson and Bryce Brown all went home that night with three assists as well. Pearl said how important this win was to their team.

The Bulldogs are working with a young team this year consisting of nine freshmen, four sophomores, and only one junior and one senior. Without having played together for a while, the Bulldogs have found themselves not playing to their full potential in comparison to other teams.

Previous SEC Hoops Preview: No.15 Kentucky Looking to Rebound Against LSU
Next No. 17 Florida Takes Down Georgia 72-60 Behind Stellar Backcourt Play