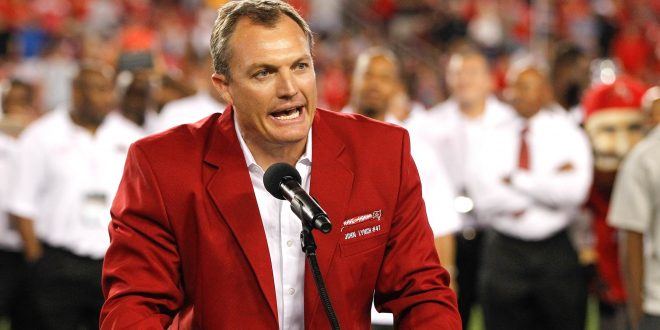 Nov 3, 2016; Tampa, FL, USA; Tampa Bay Buccaneers former safety John Lynch addresses the crowd as his name is added to the Buccaneers Ring of Fame during the halftime ceremony of a football game between the Tampa Bay Buccaneers and the Atlanta Falcons at Raymond James Stadium. Mandatory Credit: Reinhold Matay-USA TODAY Sports

“We do have some considerable work to do.” 49ers general manager John Lynch said, shortly after inking his name with the team.

Lynch’s outlook is an understatement. San Francisco managed just two wins last season. Their offense averaged the league’s second-lowest yards per game at 308.1. Los Angeles was the only offense to average less yards than San Francisco. In fact, the Rams were the one team the 49ers managed to beat last season.

Needless to say, offense is the focal point as San Francisco looks to bounce back into the ranks of elite NFL contenders.

One year removed from a Super Bowl berth, San Fran reached the NFC championship in 2013 after posting a 12-4 regular season record. Since then, the ‘9ers have been in a steady decline due to issues with both players and personnel. Last season, San Francisco tried the famous “Chip Kelly Experiment”, which resulted in both Kelly and general manager Trent Baalke being fired.

San Francisco is rich with football history, and from 1982 to 1995 the city saw greats like Joe Montana and Steve Young combine for five Super Bowls. While the franchise was solidified as a dynasty during this time, there’s an expectation for greatness now.

In order to return to the national spotlight, San Francisco is going to need a quarterback. Lynch emphasized the position’s importance, pointing to a striking statistic: 14 of the past 16 Superbowls have featured the same three AFC quarterbacks – Tom Brady, Peyton Manning, and Ben Roethlisberger.

Simply put, Blaine Gabbert and Colin Kaepernick are not franchise quarterbacks. The 49ers could use the second pick of the 2017 NFL Draft on a proven leader like Clemson’s Deshaun Watson, but they also have extensive needs on the defensive side of the ball.

If San Francisco utilizes free agency to find a veteran placeholder like Tony Romo, their first round pick may bring in Alabama defensive lineman Jonathan Allen. Standing at 6’3″ and weighing in at around 300 lbs, Allen is a physical specimen who could have an immediate impact on San Fran’s 32nd-ranked rush defense.

In 2015, the Atlanta Falcons finished 8-8 with the league’s 21st-ranked scoring offense. In just one season under coordinator Kyle Shanahan, Atlanta’s offense improved from 21.2 points per game to a league-leading 33.8 PPG en route to their Super Bowl berth. Now Shanahan will get his opportunity as a head coach for San Francisco, and fans can expect an uptick in both production and scoring.

According to GM John Lynch, he has complete trust in the organization. The new personnel hires bode well for San Francisco, and it will be interesting to see how Lynch addresses team needs in the upcoming draft.