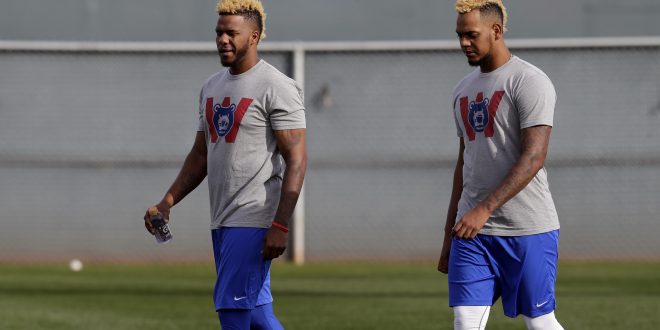 Cubs Return To The Mound to Start Spring Training

The Chicago Cubs are returning to the mound for the first time since winning the World Series. With the spring-training season upon us, the team enters Sloan Park to begin the work for the upcoming season. After guiding the team to its first World Series win since 1909, Cubs manager Joe Maddon believes that it is important for the team to be uncomfortable, authentic, and to not forget the heartbeat. Maddon says that the team is moving forward from their world series win and although impressed with their 2016 season, the new year will be different.

For catcher Kyle Schwarber, he refuses to let a injured left knee to stop him from being able to catch. The veteran catcher tore his ACL and LCL in his left knee in the third game of the 2016 regular season. Schwarber spent the offseason at the Cubs’ complex receiving rehab for the injury. He made a comeback to serve as the designated hitter in the World Series but was not cleared to play the outfield at the time. Schwarber was then examined by medical staff on Tuesday and if cleared, would begin catching one to two days a week this spring.

For the tickets, pretty much every key player is featured. Although the design is said to be ordinary, every ticket reads “2016 WORLD CHAMPIONS”. Last year, the Cubs set a spring training attendance record with 226,000 fans over 15 games at Sloan. The team is expected to attract an even greater number this season, Feb. 25 to March 29.

The team begins Spring Training February 14 and will continue practice through March 29. For the regular season, the Cubs will travel to St. Louis to take on the Cardinals for their season opener on Sunday, April 2. The team returns to Wrigley Field on Monday, April 10 facing the LA Dodgers as the Cubs home opener.