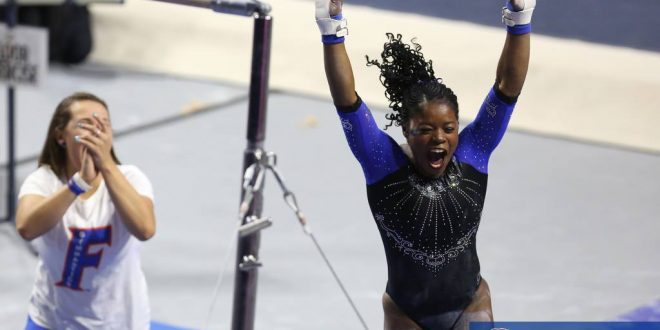 No. 3 Gators Gymnastics Defeat No. 23 Arkansas

The third ranked Florida gymnastics team defeated the number 23 Arkansas Razorbacks Friday night, 197.125-195.200 in Fayetteville. Florida came out on top in every event of the night with top scorers Alicia Boren, Alex McMurtry and Rachel Gowey.

Moving into the second rotation, the Gators were on the vault. Alicia Boren and Rachel Slocum were both the top performers of this event coming in first with a score of 9.925. The Gators ended the rotation with a running score of 98.750, while Arkansas had 97.900.

For the third rotation, Florida moved onto the floor. Meanwhile, Arkansas moved to the beam. Alicia Boren was the top performer during this event with a score of 9.950. The Gators continued to defeat the Razorbacks as they ended the rotation with a running score of 148.000-145.875.

Florida moved to the beam for the fourth and final rotation of the night. Rachel Gowey came out on top of this event with a top score of 9.900. The Gators ended the last rotation defeating the Razorbacks, 197.125-195.200.

The Gators will be back at home next Friday as they take on the Missouri Tigers. The meet is set for 6:45 p.m. Make sure to catch coverage of the meet on the SEC Network.

Sydney is a senior studying telecommunications with a specialization in sports media at the University of Florida. She is a multimedia sports reporter for ESPN 98.1 FM/850 AM WRUF and WUFT-TV.
Previous Clash at Daytona 2017
Next No. 1 Florida Softball Earns Two Wins