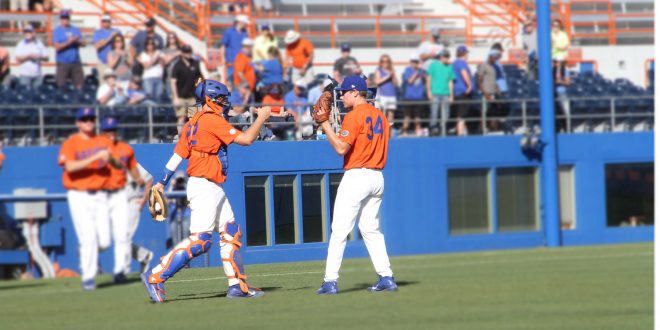 GAINESVILLE, FL- The Gator baseball team put on a show at Mckethan Stadium Sunday taking down William and Mary 11-6 in the final game of their season opening series. Sophomore right-hander Jackson Kowar was lights out on the mound throwing 5 and 2/3 innings with 10 strikeouts. The Gators used the strong start by Kowar and three home runs to push them past the Tribe. Kowar says that after watching the first two nights he was excited to go out and give a quality start for the boys.

In the first inning junior Dalton Guthrie led off with a hustle double and later scored on a sacrifice fly by Jonathan India to give the Gators a 1-0 lead.

The bottom of the second was a huge inning for the Gators. Mike Rivera hit a lead off single to start the inning. Then freshman Austin Langworthy hit the first home run of his college career to put the Gators up 3-0. When asked what his stats mean to him, Langworthy said he sees them as having quality at bats and doing his job at the plate. Keenan Bell and Christian Hicks hit singles and Guthrie drove in a run on an error.   Then Deacon Liput hit a long three run homer to right field to complete the big inning.  In the fourth, Florida went up 9-0 after a single by Rivera that brought home both Guthrie and India.

Nothing happened in the top of the third, so we'll show you Deacon's HR. #LiputGood

The top of the sixth inning was where William and Mary got on the board.  A double by Cullen Large scored Brandon Raquet, a wild pitch by Kowar scored Matthew Trehub and a passed ball brought home Large. After 5 and 2/3 innings, Freshman Andrew Baker replaced Kowar. Baker got out of the inning with out any more damage being done.

The third Gator home run of the game came when Keenan Bell hit his first career shot, a two run blast, in the seventh inning.  The Tribe answered back and had another three run inning in the eighth but it wasn’t enough to prevent the Gators from getting the sweep.

Another Freshman with a home run. Keenan Bell hits a two run shot to right.
Gators up 11-3

A total of five pitchers mad an appearance in Sunday’s game for Florida, with four of them being freshmen. Jackson Kowar got the win, his first of the year.

We got a Gator going pro. Gators baseball outfielder Austin Langworthy signed with the Detroit …