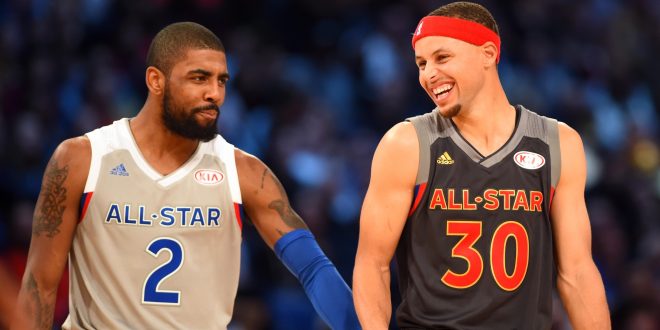 Heading into the 2017 NBA All-Star Game, much excitement and anticipation surrounded the event. Fans were in need of a spectacular show following a lackluster Saturday night – and the stars delivered. Both teams combined for a record-breaking 374 points as the West defeated the East 192-182.

Throughout the entire weekend, all eyes fixated on Golden State Warriors forward Kevin Durant and Oklahoma City Thunder guard Russell Westbrook. After Durant’s departure from Oklahoma City last summer, many have wondered if the relationship between the former teammates had been severed. While drama surrounded the players off the court, the two finally reunited on the hardwood during the first quarter.

Kevin Durant and Russell Westbrook teamed up for an alley-oop in the NBA All-Star Game as the @StateFarm Right Combination. pic.twitter.com/VdxalwDYcH

Shortly after the alley-oop, Western Conference players greeted the two with cheers during a timeout.

Following the game, Westbrook was asked about the “special” moment shared with Durant.

While Davis, Durant and Westbrook were certainly the focal points of discussion, there were also 21 other pretty good basketball players in the game. Milwaukee Bucks forward Giannis Antetokounmpo erupted during his first All-Star appearance. Antetokounmpo recorded 30 points and six rebounds, including a massive dunk over reigning league MVP Steph Curry.

In the Eastern Conference, the Cleveland Cavaliers (39-16) currently hold a three game lead over the Boston Celtics (37-20). In the West, the Golden State Warriors (47-9) lead the San Antonio Spurs (43-13) by four games. With just eight weeks remaining in the regular season, playoff spots will be scarce as we near the end.

Matthew is currently a senior, majoring in telecommunications with a minor in business administration.
@matt_levay
Previous La Liga Round 23
Next Tampa Bay Lightning Look to Fight for A Spot in The Stanley Cup Playoffs