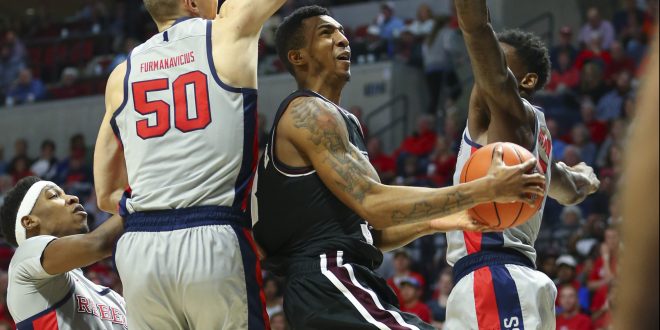 Can Ole Miss Sweep The Series?

Senior Forward Sebastian Siaz is the only player in the SEC to average a double-double. Siaz has 17 double-doubles for this season and is ranked sixth in the nation.  He hasn’t played up to his expectations, which has brought him down.  However, Head Coach Andy Kennedy says Siaz has continued to work hard.

Guard Terence Davis could factor in another Ole Miss victory.  In the game against LSU, Davis scored a career high 33 points.  Twenty-two of those were scored in the second half.  Davis will help Ole Miss during the second quarter to make sure they pull out a win.

Kennedy also plays a large roll in a win for Ole Miss.  He is in his 11th season at Ole Miss and averages 21 wins per season.  Kennedy knows exactly how to connect with his team for them to pull out a win.

Tomorrow, the Rebels and Bulldogs will meet for the 256th time in the SEC's most-played rivalry. #BeatState pic.twitter.com/PSUCwE396Q

Mississippi State: What Do They Bring to the Court?

Guard I.J. Ready is Mississippi State’s only senior.  Ready has struggled this season, but his ability to continue to work hard and have a positive attitude has kept him and the team moving forward.  His hard work and determination shows through in his defensive skills.  Head Coach Ben Howland says Ready is a strong defender.

Guards Quinndary Weatherspoon, I.J. Ready and Lamar Peters played well together last game. Howland has the opportunity to keep these three together and start them on Tuesday.  The three guards kept reading each other and would help each other out when it was the right time.

With four straight losses, Mississippi State is looking for redemption and a win.

These two teams have a long history of playing against each other.  Mississippi State has won 142 times, where Ole Miss has ‘only’ won 114 games.

Nicolette is a senior at the University of Florida who has participated and enjoys reporting on all things related to sports.
Previous SEC Hoops Preview: It’s The Battle of the Tigers as Auburn Hosts LSU
Next Region 1-3A Finals Preview: No. 8 St. Francis @ No. 6 Deltona Trinity Christian