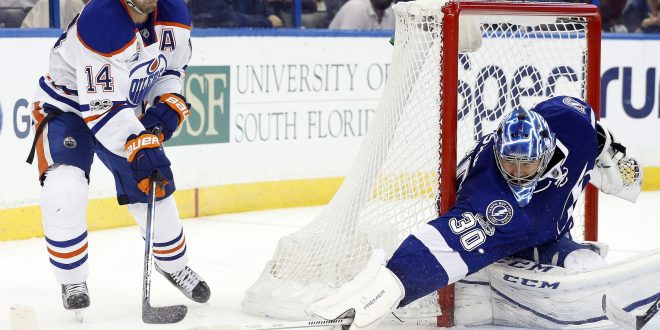 But the Lightning played some of the best hockey they’ve played all season, and it payed off.

The famous triplets for the Lightning, Tyler Johnson, Nikita Kucherov and Ondrej Palat are credited for the big win. The trio stuck together and scored three of Tampa’s first four goals. Kucherov brought the puck into the Oilers zone and assisted Palat in the first goal of the game, scored in the first five minutes of play.

Palat says his connection with Kucherov is strong.

Not even a minute into the second period, Palat had a second goal, and Kucherov took control in the final period and moved to the left circle and shot from the dot for his 22nd goal of the season.

A coaches challenge by the Lightning secured this game. Head coach Jon Cooper spotted Leon Draisaitl of the Oilers offsides, entering Tampa’s zone before the puck. The challenge was the first successful one for Coach Cooper in a while.

Goalie Ben Bishop also deserves some recognition. Bishop has a .953 save percentage, which is fifth in the league. He’s certainly one to watch. He’s also got the lowest career goals against average, sitting at 1.97.

The Lightning executed good defensive pressure. With perfect puck movement and players in the right position, this team created a trap that left Edmonton scrambling for the puck.

Cooper on the Triplets: "They're feeling it." #EDMvsTBL

Palat says every game should be treated as an important one.

The Lightning are now tied with Buffalo for 6th place in the Atlantic Division,  and are still in the wild card hunt.  They will face Calgary Thursday night at the Amalie Arena at 7:30.