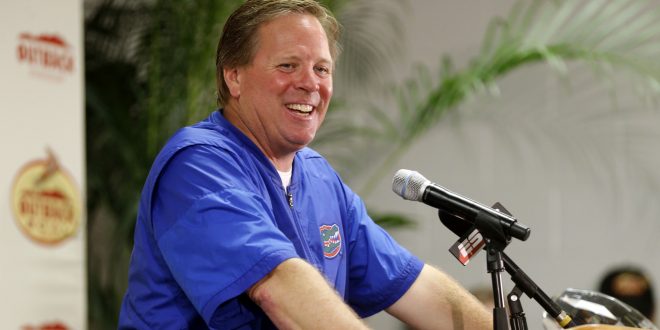 Florida football is riding high after an Outback Bowl victory and a stellar National Signing Day, but the Gators still have work to do now that Spring has sprung. Spring practices are set from February 28th to April 7th, when Florida’s Orange and Blue Debut will be played under the lights of The Swamp.

Florida head coach Jim McElwain had plenty to talk about during the Spring’s first press conference, including injury updates and midseason additions. McElwain also broke down the workload for the upcoming practice schedule.

“We’re going to take those two practices before we go to Spring Break,” Coach Mac said. “Come back, hit 13 more practices – getting ready for our Friday night game.”

While 15 practices don’t seem like much, the next few weeks will have a huge impact on the program’s development. With young players coming in and new coaching staff hires, Florida’s spring can make or break the momentum that carries over from last season. That momentum is building after the announcement of a new $60 million football complex.

“I think the excitement and the momentum that we built, it continues to roll and go forward.” McElwain said. “Moving forward with the new facilities is a game changer.”

McElwain is heading into his third season with the team, and he knows that SEC schools need every possible competitive edge in the uber-competitive college recruiting world.

“What we’ve overcome, what we’ve been able to build in the two short years we’ve been here, has been outstanding.”

All of the following Gators will miss spring practices:

According to McElwain, this spring will say a lot about what type of team Florida will be come fall. McElwain explained that leaders will step up in the spring, and playmakers must separate themselves by filling the fundamental needs of each unit. One big question mark for all Gator fans: Is Florida finally getting itself a quarterback? All eyes are on Feleipe Franks and Kyle Trask, but McElwain has hinted at a three-way position battle.

This spring is bound to bring some interesting developments, and Florida is primed and ready for the young talent coming in. After all, UF has already brought in three new assistant coaching hires to compliment the addition of midseason enrollees. Highly recruited incoming talents are expected to continue Florida’s DBU tradition, but now is the time for McElwain’s offense to make its strides.