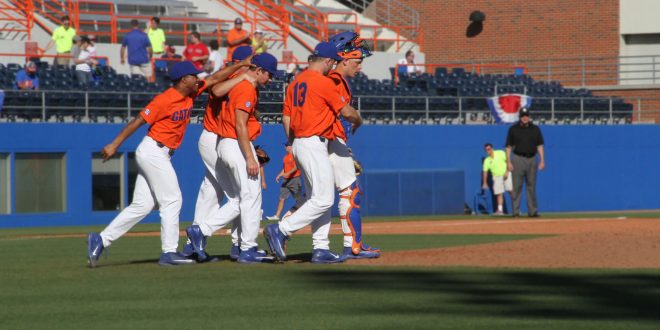 The Gator Baseball teams returns to McKethan Stadium this weekend for a three-game series against rival, No. 17 Miami Hurricanes.

Florida is back in action after their game scheduled for Wednesday against Jacksonville was rained out. Now, the Gator are coming off an away loss to Jacksonville on Tuesday, when Jacksonville’s Scott Dubrule hit a walk-off single with the bases loaded in the ninth to push the team to a three run come back. It is the Gators’ first first midweek loss since April 14, 2015 at Florida State.

Miami is also coming into the weekend off a loss. The Hurricanes were scheduled to play FIU mid-week but their game was also canceled due to weather. In the preceding weekend, they dropped the third game of their opening weekend series with Rutgers. It was a lopsided 17-6 final score.

The History of the Rivalry

The home series against Miami is always a much anticipated in-state rivalry for both the teams and fans. The Canes lead the 128-117-1 but as of late Florida has been dominant. Over the past 10 meetings, the Gators are 7-3 against the Canes.

With the home field advantage the Gators are 71-47-1 and they have won the past two regular-season series (2-1 both times). Post-season, they also came out on top. The Gators won  two games over the Canes in Omaha in 2015. Over the past 10 meetings, the Gators are 7-3 against the Canes.

The Learning Curve of Rookies

Due to having a small recruiting class the last two seasons, the Hurricanes are short on experienced players who have a few years under their belt in the program.

Their lineup may look like a group of veterans but a vast majority of the juniors out in the field for Miami are junior college transfers, which comes with its own process of adjusting.

Miami’s head coach Jim Morris said that the rookie squad is going through a learning curve.

What To Expect From The Bullpen

Junior Jesse Lapore was the Wednesday starter last year and has taken over the Friday night spot.  Lepore goes after after batters aggressively and when he locates well he has the potential to be a major threat on the mound. He mostly hits in the low 90’s with a hard breaking ball and a change up in his back pocket.

Frankie Bartow is a junior college transfer that may not be the most overpowering pitcher but has the ability to really deliver. He’s been serving at the closing role so far for the Canes.

Loading up the buses and talking a little #RivalryWeekend before we head up to Gainesville this afternoon… #BeatFlorida pic.twitter.com/BN7b5lBypw

Injury In The Infield

Senior Johnny Ruiz is the Canes’ leading infielder but is out due to injury which may prove to be a weakness for the team. Junior infielder Jesse Lepore is just now coming back form injury and played for the first time on Sunday.

Canes head coach Jim Morris said that with this series occurring so early in the year each season, it often gives a good gauge of where the team is at.

Friday and Saturday’s games will start at 6:30 p.m. and Sunday’s finale is slated for 1 p.m.