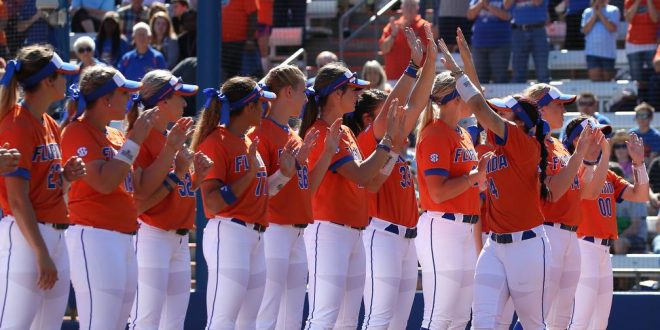 No. 3 Gator Softball Go Undefeated At The Orange Classic

Another dominant performance from the Florida softball team as it finished the weekend 5-0 on the final day of the Diamond 6 Citrus Classic at the ESPN Wide World of Sports Complex in Orlando.  The Gators are now 15-1 on the season.

During Sunday’s 5-0 win against the Mountain Hawks, sophomore Kelly Barnhill faced a total of 13 batters through four innings and recorded 11 strikeouts.

Florida took the lead in the top of the first inning of play with an RBI single from freshman Jordan Roberts that led to freshman Sophia Reynoso scoring on the play.

During the fourth inning freshman Jaimie Hoover tallied her third home run of the season. Senior Justine McLean scored for the team in the fifth inning from an RBI single from sophomore Amanda Lorenz.

In Florida’s final at bat, Reynoso scored Justine McLean on a suicide squeeze bunt and Raynoso scored after a throwing error on the play.

FINAL | Another one-hit shutout for the Gators to cap off the Diamond 9 Citrus Classic pic.twitter.com/hoAwULHNyS

The Gators will head to Fullerton, California for the Judi Garman Classic that begins on Thursday. The team will face Iowa, Long Beach State, Cal, UCLA and Northwestern.