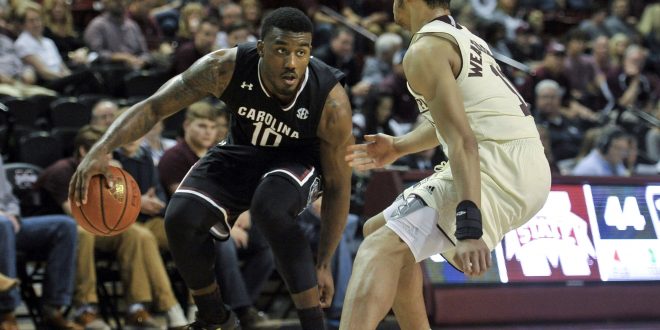 Mississippi State looks to snap a six game losing skid Tuesday night as they travel to South Carolina to face the Gamecocks on Senior Night.

Last Time on the Court

The Bulldogs (14-14, 5-11 SEC) suffered its worst loss of the season on Saturday, losing 77-48 on the road to Vanderbilt. They also shot their worst from the field on the season, shooting an abysmal 29.8 percent. The Bulldogs were down for most of the game with no chance of making a comeback. With about eleven minutes remaining in the game, the Commodores held a 61-28 lead. The Bulldogs also committed 17 turnovers in the loss. Mississippi State head coach Ben Howland experimented with his lineup by starting three freshman and a sophomore. The Bulldogs are considered by many to be the youngest team in the country.

Unlike the Bulldogs, the Gamecocks were able to snap its losing streak at three following an 82-55 win over Tennessee Saturday. The outcome of the game rested beyond the three point line. The Gamecocks lead shrunk to four early in the second half. That lead would then inflate thanks to South Carolina senior guard Duane Notice catching fire from beyond the arc. Notice hit three of his five three pointers in a span of two minutes to catapult the Gamecocks to its first win in two weeks. Notice was more effective from three than the entire Tennessee lineup, who only made one three pointer the entire game.

The Gamecocks were able to snap its three game losing streak Saturday. Now, South Carolina will look to snap its streak of missing the NCAA Tournament. The Gamecocks have missed out on the tournament following a late season collapse last year. South Carolina fell in five of its final eight games that took them out of the tournament and into the NIT. A win over a struggling Mississippi State team could lock up the Gamecocks spot in the tournament for the first time since 2004, which is one of the longest postseason droughts of any Power 5 conference team.

Before South Carolina suffered its season long three game losing streak, they came up victorious against the Bulldogs in Starkville. The Gamecocks won 77-73. One of the main reasons South Carolina was able to win that game was they were able to get to the line and convert. The Gamecocks got to the line 29 times, thanks to Mississippi State committing 27 fouls, and converting 17 times. If the Bulldogs hope to pull the upset, they will have to stay out of foul trouble and duplicate their efficient shooting performance. The Bulldogs shot 52.9 from the field last time they faced the SEC’s best defense.

Tip off from Colonial Life Arena is set for Tuesday at 8:30.