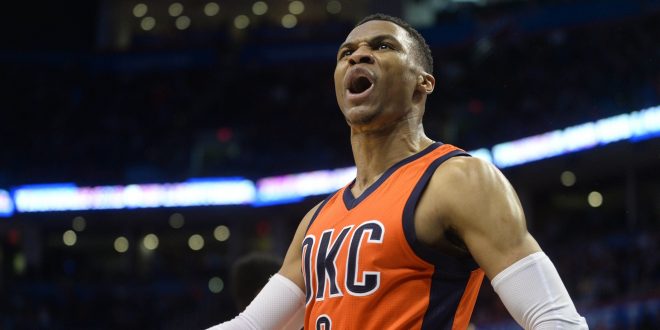 Heading into the 2016-17 season, the future of the Oklahoma City Thunder remained uncertain. With the departure of All-Star forward Kevin Durant, the organization was in desperate need of a new franchise leader. Fortunately, point guard Russell Westbrook has risen to the occasion.

Westbrook has been seemingly unstoppable for the Thunder. At 31 points per game, 10.6 rebounds and 10.3 assists, Westbrook is on pace to become the first player to average a triple-double since Oscar Robertson in 1961-62. The seven-time All-Star has excelled in all facets of the game, putting him in contention for the league’s Most Valuable Player award.

In his latest showdown against the New Orleans Pelicans, Westbrook showed no signs of slowing down. He played one of his best games of the season, erupting for 41 points, 11 rebounds and 11 assists. Scoring 21 of his 41 points in the fourth quarter, Westbrook helped seal a 118-110 victory for the Thunder.

Of course, there are no shortage of highlights whenever Westbrook hits the court. With the game winding down in the fourth quarter, Westbrook rose up for a massive dunk over Pelicans center Demarcus Cousins.

Russell Westbrook (@russwest44) dunks over DeMarcus Cousins and gets the harm to foul Boogie out of the game! #ThunderUp pic.twitter.com/LrXlqP2j6l

The dunk adds just another highlight to his already sensational year.

With less than two months remaining in the regular season, the Thunder (34-25) currently hold the No. 7 spot in the Western Conference standings. With multiple teams in the hunt for the final playoff spots, the team will need to maintain their consistency as the end of the season draws near. While many expectations remain fixed on simply making the playoffs, Westbrook says the ultimate goal is to win a championship.

The Thunder are currently riding on a three-game win streak. The next step for the team will begin on Tuesday night. They’ll look to continue their hot play when they host the Utah Jazz at Chesapeake Energy Arena.