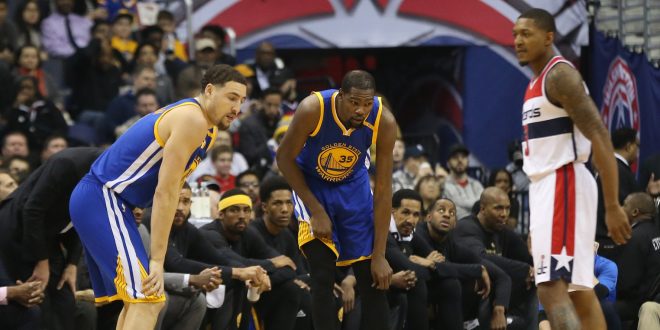 The Golden State Warriors will face their first true test of the season as superstar forward Kevin Durant injured his left knee in Tuesday night’s loss to the Washington Wizards.

Despite initial reports saying Durant could miss the entire season, MRI results show he could return before the regular season ends. Durant reportedly suffered a Grade 2 MCL sprain and tibial bone bruise. He will be reevaluated in four weeks and there is no timetable for his return

This is the All-Star forward’s most severe injury in his 10-year career.

Here are the season’s in which Durant suffered injuries:

On a defensive possession for the Warriors, Golden State center Zaza Pachulia was pushed to the ground by Wizards big man Marcin Gortat. On his way down, Pachulia landed on Durant’s knee which seemingly caused the injury as he immediately reacted by hopping on his right leg and holding his left knee.

In his walk back to the locker room, Durant was clearly in pain.

Durant is averaging 25.8 points, 8.4 rebounds and 4.9 assists in his first season with Golden State.

The Warriors are waiving Jose Calderon after KD’s injury. They are now committing to signing forward Matt Barnes in wake of the injury.

Barnes will begin his second stint with the Warriors as he played in Oakland from 2006-2008.

He expressed his excitement of being signed to the rest-of-season deal.

Previous No. 2 Gators Baseball Win Close One Against UCF Knights 4-3
Next No. 15 Florida State Falls to No. 17 Duke