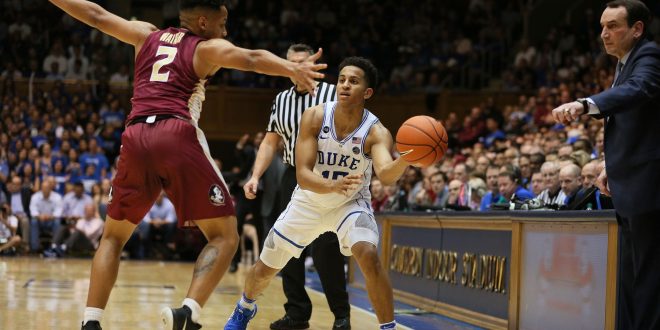 What better time than senior night for Duke to come out on top? This game ended 75-70, but securing this win almost looked easy. ACC basketball is no joke this season. Duke is one of those teams that always make you remember who you came to play.

First things first- Duke head coach Mike Krzyzewski wants to make one things clear. There is no such thing as a slump in Blue Devil nation.

If Duke can keep this momentum rolling, they might set themselves up in a good spot come tournament time. A big game this weekend against North Carolina will be the true test. Duke is now 23-7 and 5th in the ACC.

Coach Krzyzewski had a lot to say about the game. He made it clear that both teams put in the maximum amount of effort.

FSU never really got their usual rhythm going in this game. After missing multiple opportunities to score, they couldn’t get back on their feet.

Their demanding offense usually puts up 84.1 points per game. Last time they played Duke, they threw up 88 points in January. So this game seemed like a no-brainer. But this team let the Blue Devil’s swoop in at the wrong time and at the wrong place. With 17 offensive rebounds and almost no pressure applied on Duke, the good ole’ Noles couldn’t come through.

They still have some time, after all their record is a decent 23-7. But their 4th place spot in the ACC isn’t helping their cause. With another big game around the corner, FSU doesn’t have much time to prepare for Miami on Saturday.