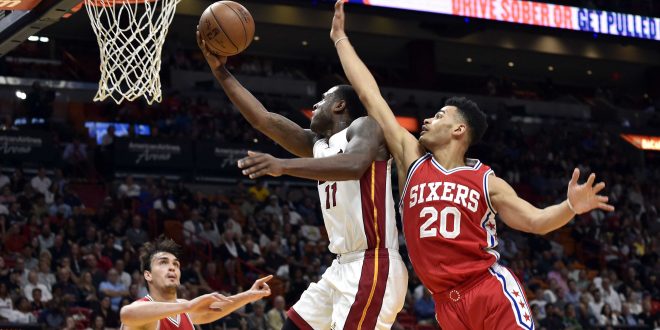 Heat Back to Winning Ways After Defeating 76ers

After falling to the Dallas Mavericks earlier this week 96-89, the Miami Heat returned back to South Beach to get the win over the Philadelphia 76ers. The Heat defeated the 76ers Wednesday night with a final score of 125-98 at the American Airlines Arena.

The Heat went on a 7-0 run at the beginning of the game and never even trailed the 76ers throughout it. Within 49 seconds after tip off the 76ers called their first timeout.

At halftime the Heat had their largest lead of the season as well when they led the 76ers 64-44.

Tyler Johnson led in points for the heat with 24, went 8-for-12 in shooting, and 2-for-3 from downtown. The guard also added four assists, two steals, and two rebounds off the bench as well. “Tonight I felt like I was in a good rhythm, the ball kept finding me” Johnson said.

Hassan Whiteside grabbed a game high 11 rebounds and added 15 points for Miami. Whiteside had an all around game with jumpers, shooting from inside the paint, and hook shots. Whiteside went 6-for-9 in shooting that night as well.

Dion Waiters and Goran Dragic  were also members of that 15-point club Wednesday night. Waiters really shined in the third quarter where he scored 10 of his 15 points in that period. He also went 7-for-12 in shooting while Dragic went 6-for-13 from the field.

Wayne Ellington also had a standout game with 18 points for the Heat. He added six three pointers which was a season high for him. This really helped to protect Miami’s lead in the fourth quarter. “We had a bad taste in our mouth with the Dallas game. We wanted to make sure we gave our entire effort and energy on the defensive end of the floor.  We knew for this game we didn’t want that same taste.” Ellington said.

The Heat shot at 54 percent and they also made 13 three pointers.

The 76ers  had a new injury to their roster. On Wednesday news was released that center Joel Embiid would miss the rest of the NBA season with a left knee injury.

The Miami Heat will stay in the Sunshine State for their next game when they take on the Orlando Magic on Friday.