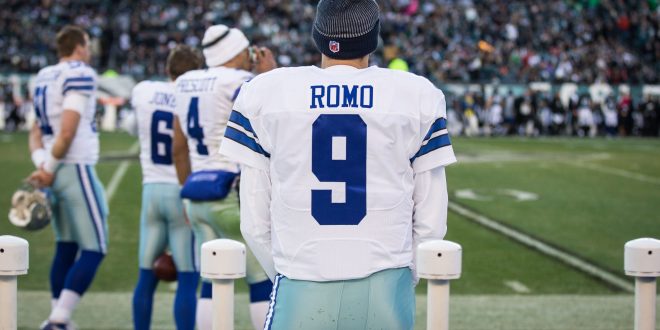 The Future of Tony Romo

With the NFL combine gearing up this week, it prompts teams to reflect on what they’ve got in their program but even more so what they are missing.

For the Dallas Cowboys, the biggest question mark hangs over quarterback Tony Romo. How will he bounce back from an injury riddled season? Are the Broncos in the market for a new quarterback? How crucial is a veteran quarterback like Romo to a franchise right now?

As to the last question, some would say very. There’s not many circulating the league right now, especially those up for free agency soon. The Patriots proved that an old dog doesn’t need new tricks to be able to win it all. The Jets, Bears, Bills, Cardinals and 49ers are all on the look out to snag one right now to build an offense around. So for a player like Romo, that leaves the options open but no deal comes without a few hitches.

Staying True To His Roots…

Since getting drafted to the NFL in 2003, Romo has been a Cowboy from day one. He worked his way up from third-string quarterback to one of the franchise’s stars over the course of four years. From 2006-14, Romo started 123 games for Dallas and led the team to a 75-48 record and four playoff appearances under center. As of late, Romo hasn’t taken the field for Dallas too often due to injury. He’s only appeared in five games over the past two seasons.

Now, the Cowboys are more Dak Prescott’s team than anyone’s. He led the team to a 13-3 regular season record and remained the team’s starter after Romo’s return from a preseason back injury. Head coach Jason Garrett said that with Romo’s injuries and losing the role of starting quarterback, he handled the adjustments well. Whether Dallas wants to keep Romo around or not, they are on the hook for $19.6 million in total whether they trade or release him.

Romo will remain a Cowboy and on the roster until at least March 9, when the new league year begins. Free agency will open up  and trades can happen once the NFL’s calendar rolls over. If he’s released, he cannot be traded officially until the NFL’s calendar flips over, should Dallas go that route.

The most talk has surrounded Romo going to Denver, but John Elway, general manager of the Broncos, was about the quarterback status for the team but he did say they are keeping their options open.   If Romo is one of those options, he would join the mix with Trevor Siemian and Paxton Lynch.

Jason Garrett on conversations he's had with Tony Romo: pic.twitter.com/Zm38OOwawd

Either way, Garrett spoke highly of Romo’s career in Dallas and said that they’ll take the situation as it comes with his legacy as a Cowboy in mind.