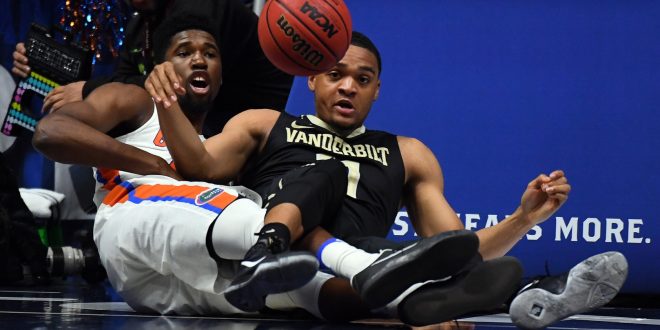 Vanderbilt Takes Down Florida For The Third Time This Season, 72-62, Ending Their SEC Tournament Early

The Vanderbilt Commodores might just be Florida Gator kryptonite. Vandy took down Florida, 72-62, ending their SEC Tournament in the quarterfinals. The win marked the third time the Commodores have beaten the Gators this season. UF will now wait until Sunday to see if the NCAA Tournament committee will keep them as a 4-seed with a game in Orlando. Vanderbilt will take on the winner of Ole Miss/Arkansas on Saturday afternoon at 3 p.m.

Vanderbilt shot 41% from beyond the arc and 43% from the field. Florida knocked down 26% of their three-pointer and 34% of their total shots. The Commodores had 12 assists on 24 made shots and both teams finished with 40 total rebounds.

Florida was outscored 14-4 in overtime, making their only basket of the OT period with 52 seconds left. The Gators have now lost in the quarterfinals of the SEC Tournament for the third straight year. The game marked the first time since the 2007-2008 season that UF lost their SEC Tournament opener.

Florida came out guarding Vanderbilt at the three-point line, forcing the Commodores away from their most successful form of offense. After six minutes of play, the Gators led by five.

Chris Chiozza’s substitution into the game allowed Florida to play their quickest style of basketball. He jumpstarted the offense with a lightning-fast pass to Devin Robinson for the lay-up in one of his first possessions on the floor. In his first three minutes of play he had three points, one rebound, one assist and one steal as the Gators led by four with 10:25 left in the first frame.

A stretch of seven misses on nine attempts by Florida allowed Vanderbilt to pull within one with just under eight minutes remaining in the first half. Kevarrius Hayes struggled early on the inside on offense and defense, as Luke Kornet continued to pound the rock in the paint.

Vanderbilt took their first lead at 24-22 with 5:56 left in the first twenty minutes. A 6-0 run powered the impressive stretch.

The Commodores ended the first half on a 22-11 run, taking a 33-28 lead into halftime. Luke Kornet led Vanderbilt with 8 points and 7 rebounds in the first frame, while Kasey Hill and Keith Stone led the Gators with 6 points apiece.

Vandy went 6-14 from beyond the arc, while UF completed only 1 of 7 shots from downtown in the first half. The Gators outscored the ‘Dores, 16-8, in the paint and 6-0 in second chance points. Vanderbilt had 6 assists on their 10 makes in the first twenty minutes. Florida won the first half rebounding battle, 20-19.

Florida opened up the second half with three turnovers in the first four minutes and five seconds of play. Vanderbilt held a 40-34 lead as they shot 3-6 to start the final twenty minutes.

Full court pressure and KeVaughn Allen’s lights out shooting brought Florida back within two points with 14:24 left in the second half. The Gators even forced a five-second inbound violation on the Commodores with their ruthless persistence on defense.

The Gators went over seven minutes without a made shot before Kasey Hill hit an acrobatic lay-up around Luke Kornet. Florida trailed by four at the 5:51 mark of the second half.

A 6-0 run, done in less than two minutes, tied the game up for the Gators after KeVaughn Allen knocked down a double-contested three-pointer. The game was tied up at 57 with 38.4 seconds left in the contest.

After Devin Robinson and Jeff Roberson went 1-2 on back-to-back possessions at the free throw line, the Gators held the ball for the final possession with 9.7 seconds left. Kasey Hill missed an open lay-up opportunity sending the game into overtime.

Florida was outscored 14-4 in the overtime period and didn’t hit their first shot of the OT period until the 52 second mark. The Gators went 1-6 from the field in overtime as well.

First OT game in the SEC Tourney since 2004 quarterfinals, a Gator win vs. Alabama. https://t.co/djpJUZ1okn