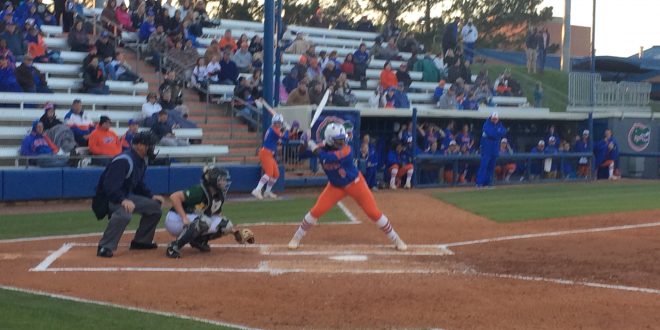 Freshman Jaimie Hoover up to bat against North Dakota State University. The Gators beat the Bison 13-0 in five innings. March 15, 2017.

No. 2 Florida Will Travel to Play South Carolina

For their second SEC series of the season, the No. 2 Florida Gators will go on the road to face the South Carolina Gamecocks. The first game will be Friday night at 7 p.m.

The Gators (23-1, 2-0 SEC) most recently defeated North Dakota State in a midweek game on Wednesday night. Florida won 13-0 in five innings, scoring ten runs in the fourth. It was the Gators’ third shutout in a row and 16th on the season.

In the contest, Janell Wheaton and Chelsea Herndon each recorded five RBI and went a combined 6 for 7 at the plate, including a grand slam from Wheaton. Aleshia Ocasio started on the mound for Florida and earned her fourth win this year, while Katie Chronister pitched the final two innings to get the save.

Herndon with a career-high 5 RBIs so far tonight!

Junior Kayli Kvistad (.659) leads the team and is ranked third in the country in on-base percentage this season. Only one person in the country gets walked more than Kvistad (1.25 walks per game). Along with Amanda Lorenz, Kvistad has reached base in every game for Florida this year.

Although Florida has dominated the series against Carolina, winning 32 of the previous 33 match-ups between the teams, the Gamecocks’ roster is made up of an experienced group of players. So far this season they are 19-7 and 1-2 in conference play.

The Gamecocks most recently beat in-state rival USC Upstate at home on Wednesday night. After giving up the lead early on in the game, Carolina had their most productive inning all year, scoring seven runs in the third inning. The biggest hit came from junior Krystan White as she hit a grand slam to break a 1-1 tie. The Gamecock defense would give up four more runs, until senior Nickie Blue came in as a reliever and recorded six strikeouts to close the game.

Carolina’s offense is led by White; she leads the team in RBI (27), batting average (.413) and on-base percentage (.489). Freshman standout Mackenzie Boesel is second in each of the categories mentioned above and earned SEC Freshman of the Week honors earlier this week.

The first game between Florida and South Carolina will be Friday night in Columbia at 7 p.m. On Saturday they will play at 2 p.m. followed by the final game of the series on Sunday at 1 p.m. Each of the games can be viewed on SEC Network + on Watch ESPN.