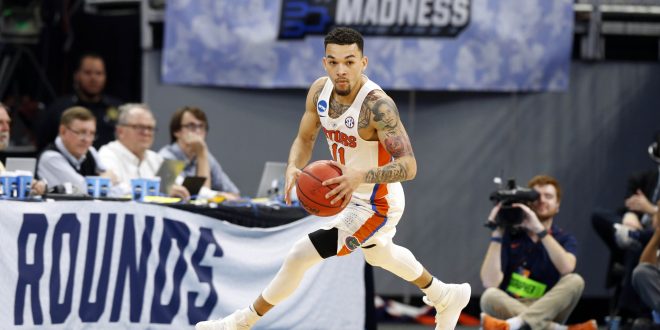 Mar 18, 2017; Orlando, FL, USA; Florida Gators guard Chris Chiozza (11) controls the ball against the Virginia Cavaliers during the second half in the second round of the 2017 NCAA Tournament at Amway Center. Mandatory Credit: Kim Klement-USA TODAY Sports

For the 11th time in school history, the Florida Gators are going to the Sweet 16. UF took down the Virginia Cavaliers, 65-39, on Saturday night in front of a home-like crowd at the Amway Center in Orlando. Devin Robinson and Justin Leon led the way for Florida, as Robinson recorded the fifth double-double of his three-year career, ending the game with 14 points and 11 rebounds. Leon recorded 14 points and 10 rebounds, which is the most points he’s had since February 11 vs. Texas A&M (18). It’s also the first time that Leon’s recorded a double-double while at the University of Florida.

The Gators shot lights out in the second half, completing 47.8% of their shots and 50% of their attempts from beyond the arc. The Cavaliers, on the other hand, couldn’t buy a basket for most of the game. They put up a poor 17 points in the first half and shot 30% from the field and 7% from downtown throughout the entire game. UF’s bench outscored UVA’s, 23-10, and the team outrebounded Virginia, 36-32.

Chris Chiozza was important in the win as well, finishing with 7 points, 5 assists and 2 steals. Virginia’s London Perrantes, the squad’s most volatile scorer, recorded 6 points, while sinking only 2 of his 12 attempts.

Florida will take on the Wisconsin Badgers on Friday, March 24 in the Sweet 16 in New York City at Madison Square Garden. The Gators are 2-2 against the Badgers in school history, with their last match-up ending in a 59-53 victory for Wisconsin in November of 2013. The Badgers defeated last year’s national champions, the Villanova Wildcats, 65-62 in the Round of 32 on Saturday afternoon.

Virginia Basketball. Not a thing of beauty.

The game got off to a rather slow offensive start, as expected. Virginia led 8-6 with 13:19 remaining in the first half. The Cavaliers opened the game 4-10 from the field, while the Gators shot 3-10. KeVaughn Allen’s 1-5 start had him hesitating on shots he would usually take towards the midway point of the first twenty minutes.

The two teams continued to battle at the Gators led by two with 7:30 left in the first frame. Devin Robinson led the way for the Gators, notching seven points and four rebounds to start the contest.

Florida played over 15 minutes without committing a foul. An impressive stat for the Gators, but nonetheless, the team only led by two with 4:20 remaining in the first twenty minutes.

The Gators closed the half on a 14-2 run, taking a 31-17 lead into halftime. Justin Leon scored eight of Florida’s final 10 points to end the first half. He had eight points and five rebounds in the first frame, while Devin Robinson had seven points and eight rebounds.

No player on Virginia had more than four points, as the Cavaliers shot 29% from the floor and 14% from beyond the arc. UF outrebounded UVA, 20-14, and outscored them in the paint, 18-12. The Gators were 5-5 from the charity stripe in the first twenty minutes, while the Cavs didn’t attempt a single free throw.

Virginia didn’t score a single point during the last five minutes and 10 seconds of the first half, missing their final seven shots. The Gators made four of their final five shots. The only minus player for Florida in the first half was KeVaughn Allen at -2. Chris Chiozza was an unbelievable +16.

Florida opened the second half on a 9-0 run thanks to two Justin Leon three-pointers. At that point, Leon had 14 points, the most he’s had since February 11 at home vs. Texas A&M, when he dropped 18. The total run stood at 21-0, starting in the first half, as the Gators took a 23-point lead with 17:35 remaining in the game.

With five minutes played in the final twenty minutes, Florida led by 22 following a Chris Chiozza three-pointer. The Gators continued to shoot well, making over 71% of their looks at this point in the game.

At the under-12 timeout, UF was shooting 60% from beyond the arc in the second half. UVA, on the other hand, was a measly 2-10 from the field and was on a streak of four minutes and 39 seconds without a made basket. The Cavs also had four turnovers in the first eight and a half minutes.

With 8:24 remaining in the game, Florida held a 26-point lead, their largest of the contest up to that point. The Cavs were 3-15 from the floor in the second half at this point in the game, while the Gators were 8-17 from the floor and 4-7 from beyond the arc.