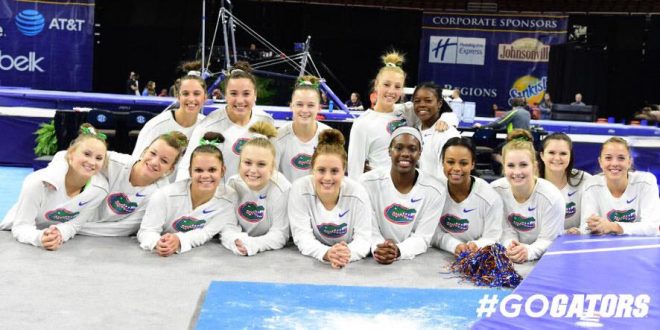 The Florida gymnastics team did not win at the SEC Championships held Saturday in Jacksonville as they finished second to LSU, the regular season champion.  However, Florida’s Alex McMurtry did win the All Around title.

The final scores from Session Two of #SECgym ⤵️ pic.twitter.com/h4MQh8W223

Alex McMurtry has taken individual events throughout the season, but on Saturday night McMurtry took the title for All-Around with a score of 39.700 making it her collegiate best score.

McMurtry has been suffering with a back injury all season long, which forced her to sit out from the All-Around in the beginning of the season. She’s only been practicing her floor routine once a week since the dancing is what causes her the most pain for her back.

She first performed her floor exercise during the Arkansas meet that took place in Fayetteville, which ended with a score of 9.275.

Then she performed her floor exercise to Gator Nation for the first time on February 24, in which she earned a perfect 10.0 score.   Perfect on a routine that had been practiced once a week and only performed twice.

McMurtry once again took the title for her floor routine, but this time for something more special. McMurtry was named floor champion alongside fellow teammate Kennedy Baker.

A Gator has won SEC floor 3 of last 4 seasons. pic.twitter.com/a4P07HUtzk

The Gators will host NCAA Regionals on April 1st.