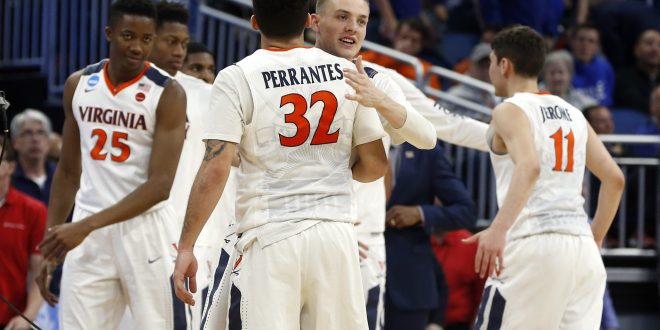 Virginia (23-10) advanced to play against the Florida Gators Saturday.

Yesterday, in an exciting match-up against UNC Wilmington, the Cavaliers locked in a win with the final score of 76-71 in the first round of March Madness. Despite having a 15-point lead on Virginia in the first half, UNCW’s ability to force turnovers waned which cost them their lead.

With about 13 minutes remaining, London Perrantes made a basket which slipped Virginia ahead 46-45. The Cavaliers were able to secure a lead for the remainder of the game. Perrantes was also able to lock in a solid 24 points and Marial Shayok also added 23 points for Virginia.

Virginia Faces Challenges in the Second Round

The Cavs might have secured their way into the second round of March Madness, but now they are down a star player. Isaiah Wilkins has strept throat which limited him on his performance on Thursday’s game. After looking miserable on the bench, Wilkins went into the locker room late in the first half. After the game, Wilkins spoke to reporters and said he does not think he is going to play in the second round.

Although Virginia was able to secure a win on Thursday, the Cavs without Wilkins is a massive loss.

No. 5 Virginia vs. No. 4 Florida Preview

While Florida and Virginia had a hard matchup on Thursday, they were both able to secure a victory and advance to the Round of 32. Now, the two teams are about to battle on the court to advance to Sweet 16. The all-time series between the two teams is tied at 1-1 going back to NIT semifinals in 1992 when UVA beat Florida, 62-56. And then in 2012, the Gators locked in a victory in the first round of Big Dance with the final score of 71-45.

Virginia is a defense-based team and without Wilkins playing, it is necessary for them to play smart. Their success will be based their defensive performance.

In offense, key players for Virginia will be London Perrantes and Marial Shayok. Perrantes is an anchor for the Virginia and Shayok was a firecracker for the Cavs in the last two games. Kyle Guy needs to play like he did against UNC and Pitt and the ACC Tournament. If the Cavaliers strengthen their defense and Perrantes plays an incredible game, Virginia could win.

Florida is a strong team, however, they are inconsistent. The Gators have a slight advantage because Wilkins is out but, they will need to smart in both their defense and offense. In their last game, they were able to score 47 points and hold East Tennessee State to only 33 points in the second half.

Virginia will face Florida at the Amway Center in Orlando on Saturday at 8:40 p.m.