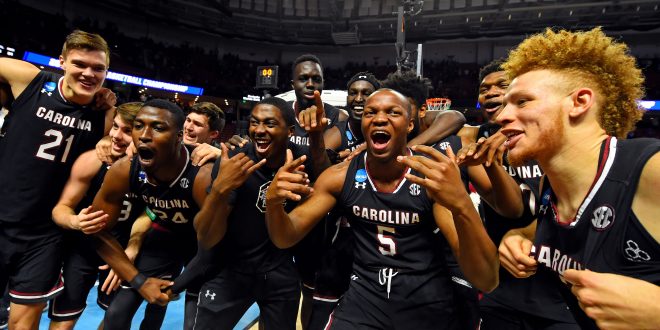 The South Carolina Gamecocks Are Now Dancing In The Sweet 16

It had been 44 years since the Gamecocks won an NCAA tournament game.

Now, they're dancing in the Sweet 16. https://t.co/KhBKPCGryl

SEC player of the year Sindarius Thornwell stuffed the stat sheet with 24 points, six rebounds, and five assists. He was one of five South Carolina players in double figures. Looking forward, Thornwell says it’s going to be tough facing off against Baylor but he has faith in his team and coach staff that they will be able to focus on the game to come.

South Carolina’s Head Coach, Frank Martin, says that while there is still more work to be done, he couldn’t be more proud of his team and what they have accomplished. Martin says their key to success in the second half was attacking the rim and capitalizing on Duke’s foul trouble. Ending the second half, the Gamecocks shot 71% and only missed eight shots.

South Carolina will join Florida, Wisconsin, and Baylor in New York City. The Gamecocks will now take on third-seeded Baylor (27-7) in the Sweet Sixteen at Madison Square Garden next Friday. Tip-off is set for 7:29 p.m.