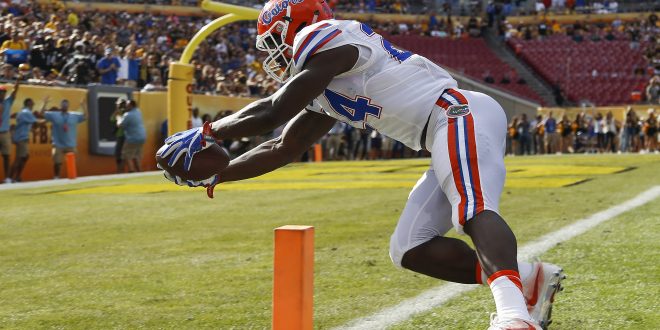 Mark Thompson, Florida’s running back, ended the season with scoring an 85-yard touchdown in the Outback Bowl against Iowa.  Thompson wants to continue his strong offensive play into spring practices and into the season.

Thompson transferred to Florida from Dodge City Community College in Kansas.  In his first season with the Gators, he struggled with consistency.  In the Outback Bowl, he caught an 85-yard touchdown pass and set two Outback Bowl Records – longest pass play and longest passing touchdown.

Thompson played in 12 games and started in four of those.  He wasn’t a huge play maker during the 2016 season.

Thompson is determined to change that for the 2017 season.

Now in his second year at Florida, Thompson is working hard to stay motivated and bettering the offense.  His touch down play continues to push him to play even better.   Thompson says he plays for explosive plays.

Thompson wants to have an explosive play every time he touches the ball.  It might not be catching an 85-yard touch down pass, but he wants to get a first down every time.

Florida is known as a defensive team and Thompson uses that as motivation.  He wants to change the team to be known as both an offensive and defensive team.

Thompson says the offense is working on becoming better and that work will be seen in the fall.

Explosive plays help the offense stay motivated.  Thompson says whenever an explosive play happens, the team gets fired up.

Thompson isn’t tired of hearing the Gators are a defensive team.  He’s ready to work hard and do everything the team needs to make the offense better.  Thompson is ready to hear the offense is doing well.

Each position is very competitive and Thompson believes if someone isn’t starting, they need to be working hard than the starter.

Thompson says the running backs are the most competitive, but that’s because he is one.

The players are motivating each other and that is going to help Florida become better in offense.

The Gators are now in their third week of spring practice.  Head Coach Jim McElwain says the offense is looking good so far.  The team will debut their new skills and talent on April 7 at the Orange and Blue game.

Nicolette is a senior at the University of Florida who has participated and enjoys reporting on all things related to sports.
Previous Kentucky Looking for a Sixth Elite Eight Appearance in Eight Years
Next Meet The Newest NBA Rivalry, Boston and Washington