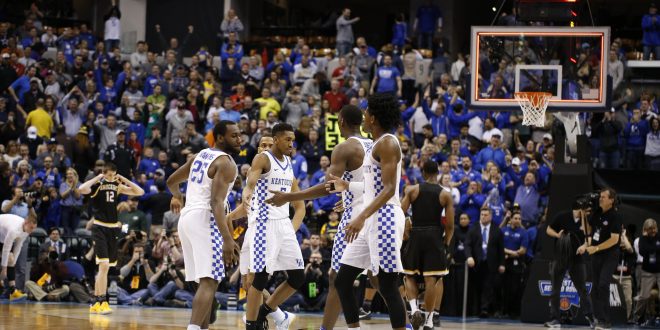 Kentucky and deep tournament runs are synonymous with each other, and head coach John Calipari has helped continue that tradition. Since becoming Kentucky’s head coach, Calipari has led the Wildcats to five Elite Eights, four Final Fours and two national championship appearances including a victory in 2012. This year, he has his team on the cusp of another deep run.

Kentucky, the second seed in the South region, has defeated 15th-seeded Northern Kentucky 79-70 and 10th-seeded Wichita State 65-62. The Wildcats have been able to survive in this tournament so far with their best player, freshman Malik Monk, shooting stone-cold as his field-goal percentage thus far has been a paltry 28.6 percent. However, Monk has still been very effective. For instance, he had a crucial block in the game against Wichita State and made two free throws with 13 seconds left in the game to ensure Kentucky’s victory.

Freshman Edrice Adebayo has elevated his game at the right time, averaging a double-double in this tournament (14 PPG, 14 RPG). His 18 boards against Northern Kentucky allowed the Wildcats to win the rebounding battle 46-40. Other key players for Kentucky’s tournament run have been freshman De’Aaron Fox (14 points against Wichita State including a late steal and dunk) and sophomore Isaiah Briscoe (17 points and eight rebounds against Northern Kentucky).

The Cats march on to Kentucky's 25th #Sweet16 since 1975. Tied with Duke for second most all-time (Duke plays its second round game tonight) pic.twitter.com/XrqqphMEyp

The Wildcats will face the third-seeded Bruins in the Sweet Sixteen. The two teams have already played each other once, with UCLA emerging victorious 97-92. In that game, Monk and Fox combined for 44 points on 46 percent shooting. But the Wildcats were unable to overcome the balanced scoring of the Bruins’ starting lineup, with all five of their starters reaching double-digit scoring figures. So far, UCLA has had Kentucky’s number, coming out victorious the last two games they’ve played each other. The last time Kentucky beat UCLA was in 2014. That year, Kentucky throttled UCLA 83-44 and had a 41-7 halftime lead.

These two teams share historical significance, having a combined 19 titles between them. UCLA has won 11 national championships, which is the most of any men’s Division 1 basketball program, while Kentucky has won eight, which is the second most. Both teams have made the Final Four 17 times, which is tied for the second-most all time. In addition, Kentucky is the all-time leader in NCAA Tournament appearances (56), NCAA Tournament games played (169) and NCAA Tournament wins (122).

To recap UCLA’s tournament run, the Bruins defeated Kent State 97-80 and Cincinnati 79-67. Point guard Lonzo Ball has been instrumental in his team’s tournament success so far, averaging 16.5 PPG on 76.5 percent shooting. The star freshman talked about coming up big for his team.

How both teams stack up against each other

With three potential top 10 draft picks, UCLA vs. Kentucky is the game to watch

Kentucky needs Monk to wake up

Kentucky is still alive in this tournament in spite of Monk not playing his best offense as of late. Although Monk has been very solid in other key areas, the Wildcats need him to get his scoring touch back to help give them a chance against UCLA. Against UCLA earlier this season, Monk scored 24 points on 52.6 percent shooting. The Wildcats will need a similar performance if they hope to beat the Bruins.