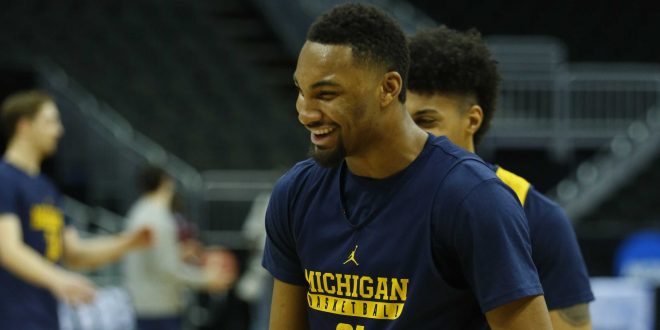 Michigan hopes to continue their glorious run in the NCAA Tournament when they face Oregon in the Midwest Region semifinal tonight at 7. The Michigan Wolverines defeated number 2 seeded Louisville in the second round to make it to Kansas City for tonight’s game. They remain the underdogs as they face a strong 3 seed in Oregon, a team who went 31-5 this season.

Not many people thought Michigan would defeat Louisville and make it this far in the tournament. Oregon head coach Dana Altman recognizes the fire within Michigan’s players, which burns on both offense and defense.

On offense, the player most will be watching is forward Moritz Wager. He dropped 26 points against Louisville, shooting 11 for 14 from the field, and scoring three 3-pointers, one of which sealed the game. On defense, keep an eye out for forward D.J. Wilson, who had 3 of the 4 blocks against Louisville. Wilson also recorded a steal and shot perfectly from the free-throw line.

Something to watch though is that Michigan’s starters played almost the entire game against Louisville. This goes to show that they are not a very deep team. Knowing this, Oregon may try to exploit this by getting Michigan’s starters in foul trouble. This would force them to make substitutions, and then Oregon could really turn the heat up on the hot team in the Midwest.

The Ducks Brought Their Rally Caps

Oregon made it through to the semifinal by defeating the 11 seed Rhode Island Rams. It wasn’t a breeze though, as they were trailing the Rams for most of the game. Tyler Dorsey scored a go ahead 3-pointer with 38.4 seconds remaining, and then Oregon shut out Rhode Island to secure the win. Dorsey was Oregon’s main man with 27 points while shooting 9 for 10 from the field. Forward Jordan Bell is another honorable mention as he recovered 6 offensive and 6 defensive rebounds. Oregon’s bench was also impressive as they didn’t miss a single shot. Keith Smith had 2 points, shooting perfect from the free throw line. Kavell Bigby-Williams scored 5 points, and Casey Benson scored 4 points, both being perfect from the field.

Both Oregon and Michigan are very strong teams all around. This is surely going to be an intense game to watch. The deciding factor might just be each team’s bench. I believe the team with the better bench tonight will leave Sprint Center with the win. We will see though, as it is truly unpredictable what will happen in this intense matchup between Oregon and Michigan. Catch the game on CBS at 7:09 p.m.

Previous Chiozza’s Resilience Brings Hopes For Gator in NCAA Tournament
Next From Guaranteed Lottery to Playoff Contender: What Exactly Happened in Miami?