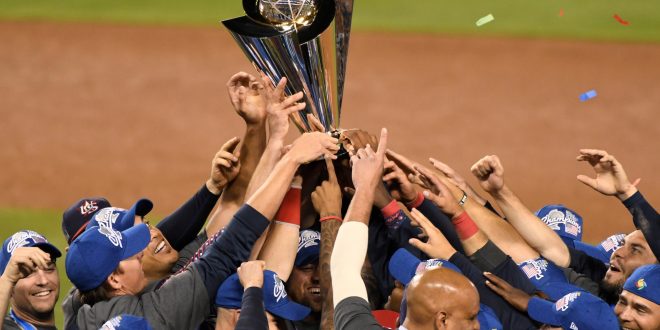 USA raises the championship trophy following the 8-0 victory against Puerto Rico in the 2017 World Baseball Classic at Dodger Stadium.

Toronto Blue Jays pitcher Marcus Stroman was the starter for Team USA. Earlier in the tournament, Stroman played poorly against Puerto Rico in the second round of pool play as he gave up six straight singles and four runs in the first inning, which earned him the loss. In the title game, it was a different story. Through six innings, Stroman had a no-hitter going in the game. During that stretch he faced the minimum 18 batters. The no-hitter was broken up on the first pitch of the seventh inning when Angel Pagan waited on an outside pitch and hit a single to left field. Manager Jim Leyland chose to take Stroman out of the game right after the hit.

Although Stroman had the opportunity to play for Puerto Rico due to his mother’s heritage, he chose to play for the US. After the game, he expressed his passion for playing for the United States.

The Puerto Rico hitter were effectively shut down as relievers finished the game for Team USA. Sam Dyson struck out two batters to finish the seventh inning. While Pat Neshak and David Robertson closed out the game in the eighth and ninth innings, respectively.

At the plate, Team USA was aggressive which earned them 13 hits in the game. Ian Kinsler opened up the scoring in the third inning with a two-run home run over left center field. The seventh inning proved to be the most productive for Team USA; with two outs and the bases loaded, Brandon Crawford hit a single to right center field which brought in two runs to increase the lead to six runs. Miami Marlins players Christian Yelich and Giancarlo Stanton each contributed with RBI singles as well.

The World Baseball Classic was first started in 2006 and is played every four years. This year was USA’s first appearance in the championship having only come as close as fourth place in 2009. 16 teams compete in two rounds of pool play, then the top four teams move on to the semi-finals. It is a quick tournament that is played during spring training which allows for the best players in the world to compete. Despite only being together for two weeks, Stroman was impressed with how quickly they were able to play so well together.

For manager Jim Leyland, the championship may have been the last time he will ear a baseball uniform. Leyland last managed the Detroit Tigers in 2013. During his time in MLB as a manager, he won three Manager of the Year awards and one World Series. After winning the World Baseball Classic, he was emotional as he dedicated the win to the US troops.