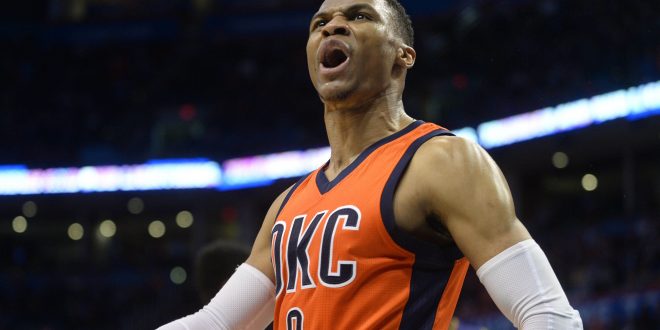 OKLAHOMA CITY – Russell Westbrook has been a man of history so far this season, and he added even more history on Wednesday night. In a matchup against the Philadelphia 76ers, Westbrook became the first player to record a triple-double while going perfect from the floor and the free throw line. The first in history…ever. Listen here to the call as Westbrook made history in front of a large crowd at Chesapeake Energy Arena.

The first in NBA history to record a triple-double while shooting 100% from the floor. Russell Westbrook. #MVP pic.twitter.com/Ja5ZoLmHHa

History In the Making

In Oklahoma City’s win over the 76ers, Westbrook shot 6-for-6 from the floor and 6-for-6 at the free throw line, finishing up the game with 18 points, 11 rebounds, and 14 assists in just 28 minutes. It seems to be that recording a triple double is now just how Russell Westbrook plays.

Wednesday’s triple double was his 35th of the season so far. Westbrook is only six triple-double games away from tying Oscar Robertson’s previous record of most triple-doubles in a season. However, Westbrook will have to attempt to break this record quickly, the Thunder only have 11 more games to play in the regular season.

As of now, Westbrook is averaging around 31 points, 11 rebounds and 10 assists per game. Head coach of the Oklahoma City Thunder and former Gator great Billy Donavan says Westbrook and the rest of the team are playing great basketball at this point in the season.

Next up the Thunder will travel to Houston to take on Rockets this Sunday at 3:30.