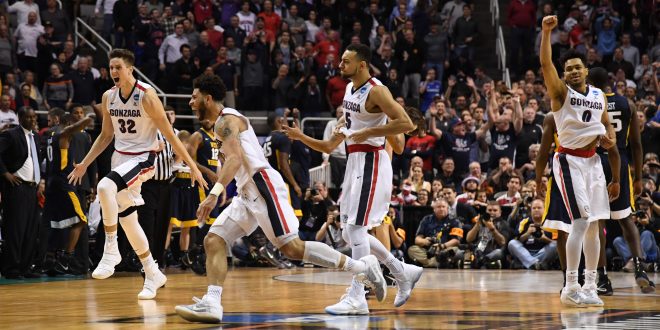 The magic of March delivered Thursday night, with three of the four Sweet 16 games coming down to the final shot. Two of the regional finals are set now after Gonzaga and Xavier won their games in the West Region, while Kansas and Oregon advanced in the Midwest Region.

What a night! #Elite8 pic.twitter.com/7vjM0b9t3J

The Zags came in as the most underrated of the No.1 seeds, and became the first No.1 seed in this tournament to make it to the Elite Eight.

Jordan Mathews’s go-ahead three-pointer with 57 seconds proved to be the clincher for Gonzaga, taking down Bob Huggins’s No.4 seed West Virginia. The win marks Gonzaga’s third ever trip to the Elite Eight.

THIS GAME IS EVERYTHING! #Sweet16 pic.twitter.com/cmLs71QEuU

Mathews, as well as Przemek Karnowski and Johnathan Williams, all scored 13 points, tying for the team lead. West Virginia junior guard Jevon Carter led all scorers with 21 points, but missed two potential game-tying three pointers in the final 30 seconds of the game. Gonzaga head coach Mark Few said the defense is what stepped up and has them on the doorstep of the Final Four.

The tournament’s last standing Cinderella lives to fight another day. Following in the footsteps of Syracuse’s run to the Final Four last year a 10th seed, Xavier is busting brackets this year as an 11 seed, upsetting popular Final Four pick Arizona to book their spot in the Elite Eight in one of the most entertaining games of the tournament..

Xavier was down 71-64 with 2:52 left after a layup from Arizona’s Kadeem Allen. From there, the Musketeers ripped off a 9-0 run down the stretch including the game winning layup from forward Sean O’Mara with 44 seconds left. Arizona had a chance to win it at the end, but star guard Allonzo Trier’s step-back three rattled out with four seconds left, and Xavier hung on for the upset.

X gives it to ya one more time! #Sweet16 pic.twitter.com/NhtVAZb05m

Xavier head coach Chris Mack said his team has grown through this process and weren’t flustered even when down late in the game. That bodes well for a team with the pieces to continue their Cinderella run. They have a star guard who can score in bunches in junior Trevon Bluiett, who led all scorers with 25 points, and also have wins now over a 3-seed, FSU, and a 2-seed, Arizona, in their last two games.

Now they’ll take on No.1 seed Gonzaga on Saturday evening, with the winner booking their first ever trip to the Final Four.

The magical run for the Wolverines dating back to the B1G Tournament came to a heartbreaking end Thursday night when Derrick Walton Jr.’s potential game-winning shot clanked off the front of the rim.

After firing off six straight wins, Michigan fell to the Ducks, who hung on in a back-and-forth game to clinch a spot in the Elite Eight for the second straight year. Tyler Dorsey scored his 20th and biggest point of the game when his layup with 1:09 left gave Oregon the 69-68 lead they would eventually see out. Dorsey tied with Walton Jr. for the game high in points, but Jordan Bell was big factor for the Ducks as well, coming up with two huge offensive rebounds down the stretch to give Oregon some second chance buckets.

Despite the loss, Michigan head coach John Beilein still feels good about his team, saying they fought their “heart out these past six weeks” to be “more than a story.”

The Jayhawks are flying right now, putting up their third 90-plus points game of the season en route to a blowout of No.4 seed Purdue.

In the only contest that wasn’t much of one on the night, Kansas’ backcourt dominated. Frank Mason III and Devonte Graham each scored 26 points as Kansas outscored Purdue 51-26 in the second half to pull away. Kansas head coach Bill Self said his team is “spoiled” to have two All-American caliber guards in Mason III and Graham.

He did it all. #Sweet16 pic.twitter.com/FLsd6Pnr7d

But it was fellow guard Lagerald Vick who provided the highlight of the game, throwing down a 360 dunk to continue the Jayhawk frenzy.

We've got a 360 dunk! #Sweet16 pic.twitter.com/YimXLCssfP

Kansas will look to book their spot in the Final Four when they take on Oregon in Kansas City on Saturday night.

Native New Englander. Follow me on Twitter: @jonacosta_10
@jonacosta_10
Previous Seasoned Badgers Prepare for Sweet 16
Next The Heat And Their Playoffs Race