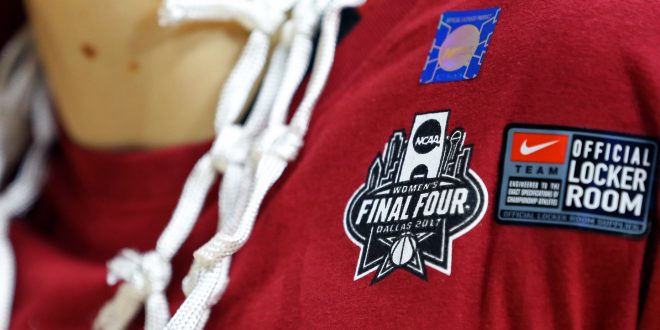 Mar 26, 2017; Lexington, KY, USA; A view of the Women's NCAA Final Four logo on the Nike shirt of a Stanford Cardinal after defeating the Notre Dame Fighting Irish in the finals of the Lexington Regional of the women's 2017 NCAA Tournament at Rupp Arena. Stanford won 76-75. Mandatory Credit: Aaron Doster-USA TODAY Sports

March Madness may be winding down, but the race to the Final Four is still heating up.  Stanford and Mississippi State both pulled off upsets to punch their tickets to the semifinals.  They will await the outcome of two games tonight– Connecticut vs. Oregon and Florida State vs. South Carolina– to see who they will face in the Final Four.

The first two teams to make it to the Final Four made it past their Elite Eight opponents on Sunday night.  No. 2 Stanford had a close match-up against No. 1 Notre Dame, just squeaking out a 76-75 win over the top seed in Lexington.

In a game that ended in overtime, Morgan William led No. 2 Mississippi State to a 94-85 victory over top-ranked Baylor.  Three years and a day after William’s father passed away, she scored a career-high 41 points to help secure a Bulldog victory.

An emotional Morgan William says this 41-point performance was for her dad. (via @clippittv)#elite8 #HailState pic.twitter.com/3b7ieWYEN2

The final two regional games are up for grabs tonight.  UConn and Oregon will lead off a 7 p.m. in Bridgeport.

No. 1 UConn is continuing their 110-game win streak, which started back in November 2014.  The Huskies are looking to extend that streak with the hopes of clinching their fifth straight national title.

No. 10 Oregon will have to fight hard and surpass all expectation if they want to beat the most dominant team in college sports right now.

No. 1 South Carolina and No. 3 Florida State will tip off at 9.  The Gamecocks look to join Mississippi State in the Final Four representing the SEC.

South Carolina and Florida State met in the Elite Eight in 2015 when the Gamecocks beat the Seminoles 80-74.  FSU will be looking for revenge, with the help of Leticia Romero and Imani Wright, two star shooters.  And if that isn’t enough, Shakayla Thomas can dunk… at 5-foot-11.   The Gamecocks will need to defend from the start to stop opposition scoring.

If Oregon and South Carolina win tonight, they will be the only two schools with teams in both the men’s and women’s Final Four.

March has been fun for Oregon hoops huh? #GoDucks https://t.co/ATYf3mBsB7

You can find both games on ESPN2 tonight, with UConn-Oregon leading off coverage at 7.  USC-FSU will begin at 9.