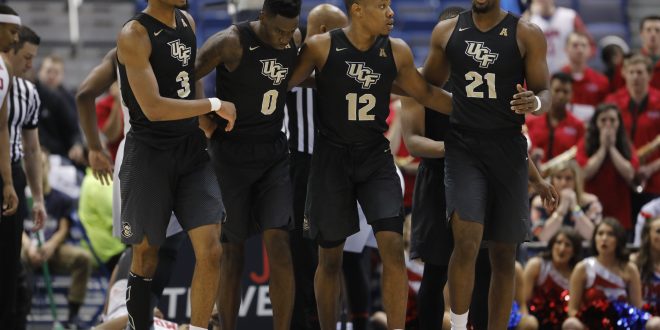 Head coach Johnny Dawkins has been enjoying a successful first year with the UCF Knights men’s basketball team, guiding it to the NIT, their first postseason appearance since 2012. The Knights will take on the TCU Horned Frogs in the NIT semifinals. The Horned Frogs are coached by Jamie Dixon who is also in his first season with the team.

How each team got here

The Knights (24-11, 11-7 in AAC play) are one of the best rebounding teams in the country, tied for third in the nation with 41.2 rebounds per game. Sophomore center Tacko Fall is the team’s rebounding catalyst, grabbing 9.7 boards per game, which leads the team. His massive 7-6 frame makes him an intimidating rim presence. UCF is especially good at grabbing defensive boards, ranking fourth in the nation with 30.2 defensive rebounds per game.

In addition to rebounding, UCF is one of the best defensive teams in the nation, ranking fifth in points allowed per game (61.0) and 17th in adjusted defensive efficiency (93.3), per Kenpom. It all starts with Tacko Fall who not only leads his team in rebounding, but also in blocks, defensive win shares and defensive box plus-minus, per Sports Reference.

The Horned Frogs (22-15, 6-12 in Big 12 play) are one of the best passing teams in the nation, dishing out 16.6 assists per game which is 18th in the nation. Sophomore guard Alex Robinson leads his team with 5.7 assists per game.  TCU has also found its groove after ending its regular season on a seven-game losing streak, winning five of its last six games.

How each team has fared in the tournament

The Knights defeated Colorado, Illinois State and Illinois to get to this point. They’ve done it with defense, allowing their opponents to score an average of 65 points per game on 37% shooting. Fall has been a terror for opposing teams in the NIT, averaging 2.3 blocks per game and grabbing 11 boards per game. Offensively, the team has been solid but not great, averaging 70 points per game on 46 percent shooting.

TCU’s offense in the NIT has been explosive, averaging 82 points. Junior forward Vladimir Brodziansky got off to a slow in the team’s first NIT game, scoring only five points. But in his last two games, he has exploded for 19.5 points per game on 64 percent shooting. TCU has been able to make it this far despite a struggling defense which has allowed 73 points per game on 49 percent shooting in the tournament.

What each team needs to better

UCF has relied on the strength of its defense all season. Offensively, it needs to be better. As mentioned before, the Knights are only averaging 70 points per game in this tournament. In the regular season, they averaged 67 points per game. Per Kenpom, UCF is 164th in adjusted offensive efficiency. A big reason for the Knights’ struggles on offense is because they have a very hard time taking care of the ball. UCF averages 14.7 turnovers per game, which is tied for 330th in the nation. The Knights also have a 0.86 assist-to-turnover ratio, which is tied for 297th in the country.

The game will start tonight at 9 p.m. on ESPN.