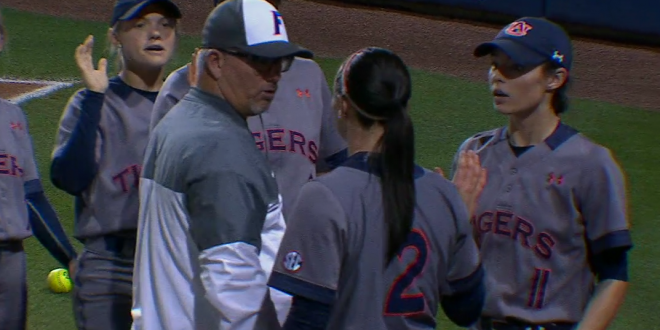 The drama continued to unfold after the No. 2 Florida Gator softball team fell to No. 4 Auburn 1-0 Monday night at Katie Seashole Pressly Stadium. The Gators had their 21-game win streak snapped in the final game of a three-game series with the Tigers and there wasn’t much sportsmanship after the contest.

An unusual incident unraveled during the postgame handshake line. Video shows Florida head coach Tim Walton raising his hand to hive-five the Auburn players. When Walton got to Tiger senior Haley Fagan, she had her hands down.

Auburn shortstop Haley Fagan and Florida coach Tim Walton get into it afterwards. Fagan didn't have her hand up, Walton got her shoulder. pic.twitter.com/UJ1lH1b5Dc

The clip shows Walton slightly bumping Fagan’s shoulder with his forearm, which appears to push her back. Fagan responded by turning around and pushing Walton with one hand in the back before the two engaged in a heated exchange of words.

Fagan’s teammates eventually restrained her as she continued screaming at Walton.

There is a long history between Walton and the Fagan family. Fagan’s two older sisters, Kasey and Sami, are former Gators. Kasey and Sami, along with another Gator softball player, were released from the program after controversial suspensions, just hours before the 2012 NCAA Tournament.

To this point, there has been no comment from the administration at Auburn or Florida concerning the altercation.