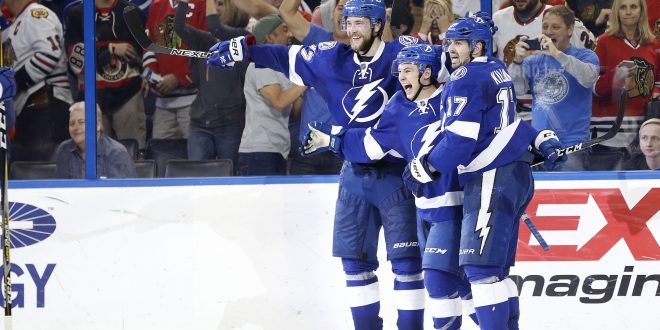 Yanni Gourde’s was the MVP of this game. He scored his second career goal in a tremendous comeback for the Tampa Bay Lightning. The 25-year-old rookie stole the puck and scored a breakaway game-winner with 35 seconds left in overtime. Gourde said, “it was a pretty amazing feeling.” That goal gave Tampa Bay a better chance to make the playoffs. Jonathan Drouin, Ondrej Palat, and Anton Stralman also scored. Andrei Vasilevskiy, who got pulled 14 minutes into the first after allowing three goals on eight shots, returned to start the second and finished with 25 saves.

Overall, Chicago outshot Tampa Bay 10-1 in the first half of the third period. In the final 15 minutes of the game Andrei Vasilevskiy helped rally the Lighting. This stopped the Blackhawks from scoring. In the final 10 minutes of the game, the Blackhawks didn’t get a single shot making the game go into over time. Head Coach Joel Queeneville is pretty upset about the overall performance of the game saying “we had everything going our way there an then we started getting cute in the neutral zone. ” Chicago regrets allowing the Lightning to get back in the game.

After this huge win, the Lightning (37-29-9) picked up two much needed points in the standings. Moving ahead of the New York Islanders in the wild-card chase and pulling within a single point of the idle Boston Bruits for the final spot in the Eastern Conference playoffs. The team’s goal is to make it to the playoffs. Head Coach Jon Cooper says this game “isn’t going to mean anything unless we get ourselves in the playoffs.” This game is just another exciting step towards their playoff dreams.

The Lightning take on Detroit on Thursday night to play the second of four straight home games.

Hello my name is Kaitlin Alexander, a passionate story teller and lover of sports. Fun facts about me: I am a world traveler, interviewed all three UF Heisman Trophy winners, and a former intern of Bleacher Report. Follow me on Twitter: KalexanderUF
@KalexanderUF
Previous Gators Softball Misses Sweep Against Auburn
Next Softball Coach Tim Walton Involved In Confrontation With Auburn Player After Loss; Releases Statement