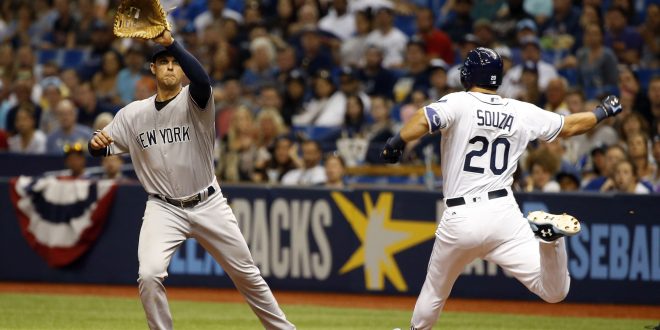 The Tampa Bay Rays and the New York Yankees will close out their opening series tonight. After splitting the first two games, tonight’s rubber match will allow one team to secure their first series win.

Opening Day began with a “W” in the win column for the Rays. Chris Archer pitched seven innings for Tampa. Evan Longoria and Logan Morrison both went yard, leading the Rays to a 7-3 win.

The sweet sound of our first W this season. #RaysUp pic.twitter.com/g5X9VS8bVs

However, the Yankees offense stole the show in the second game. The long ball proved key again, as Chase Headley and Ronald Torreyes each homered. CC Sabathia pitched five shutout innings, and the Yankees came out on top 5-0.

#StartSpreadingTheNews it's win No. ☝️!

Alex Cobb will take the mound for Tampa. Cobb pitched in five games towards the end of last season, coming off Tommy John surgery. He has seen success in his career against the Yankees, holding a 2.91 ERA against New York. Cobb says he has been paying close attention to the Yankees hitters throughout the series.

Michael Pineda will take the hill for New York. Pineda is beginning his fourth season as a Yankee. Yankee fans are hoping he returns to his early New York form; he posted a 1.89 ERA in his first season with them. However, he has had an ERA over 4 the past two seasons. He will look to get off to a good start tonight in Tampa.

Tonight’s series finale at Tropicana Field will begin at 7:10. A rematch of sorts will occur next week, as the Rays will travel to New York for a 3-game series at Yankee Stadium.

Born and raised at the ballpark! Typically quiet- until it comes to sports. I'm a South Florida native with a passion for baseball nearly as strong as my faith. Grew up in garnet + gold, turned out sporting orange + blue. Likely to be found with a camera. And yes, I take food pictures.
@victoriarossman
Previous Milton-Jones Promoted to Head Coaching Job
Next Florida Men’s Basketball Primed for Big Things in 2017-18 Season