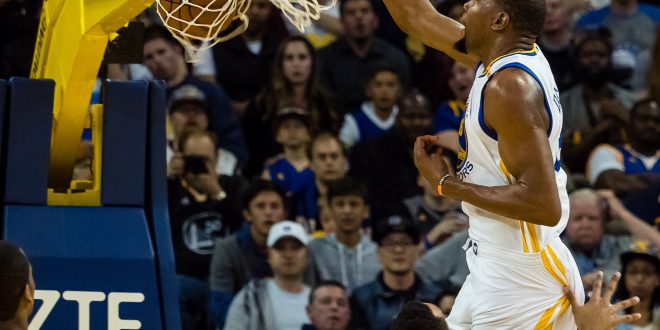 Kevin Durant Making His Way Back

Kevin Durant is slowly but surely becoming himself on the court again.  Durant’s first action since missing 19 games with a knee injury was on Saturday against the New Orleans Pelicans.  Both games he’s played in since he’s come back have been double-doubles.

With the playoffs starting on April 15, Durant has a short amount of time to shake off the rust.

Durant started in his first game back and scored 16 points and had 10 rebounds.  His knee looked sturdy and he didn’t look slow.  Durant’s shooting game showed he had been out for a while.  He went 0-4 from the three-point line, where, in previous seasons, he’s averaged 2.6-5.0.

The Warrior’s first possession of the ball consisted of Durant driving the ball to the basket and scoring with a reverse layup.  Even though Durant’s three-point game was off, he looked good in other categories.

Durant’s on court time increased to 33 minutes against the Jazz.  He once again scored 16 points and had 10 rebounds.  He made all four of his free-throws, but he still went 0-4 from the three-point line.

Durant is positive about his capability to play, but he’s concerned with his three-point shot.  He’s going to need to find his shot again to help the Warriors find success in the playoffs.

The tough loss to the Jazz showed Durant and the team what they need to fix before they head to the playoffs.

How Are The Warriors Handling Durant’s Comeback?

The Warriors have the best record in the NBA, which gives them home court advantage for majority of the rounds.  This could help Durant better his three-point shot during the playoffs.

The team is adjusting to Durant being back, but it seems to be working well.  The loss against Utah showed Durant he needed to get use to the speed and how he played before the injury.  It also showed the Warriors what they can do to still play as a competitive, winning time while Durant gets his shot back.

Durant suffered a MCL sprain on February 28 that kept him out for 19 games.  He worked hard rehabilitating his knee so he could get back out on the court before the end of the regular season.  Durant will most likely play in the remaining two games.

The Warriors play the L.A. Lakers at home for their last game of the season on Wednesday.  Tip off is at 10:30 PM EST.

Nicolette is a senior at the University of Florida who has participated and enjoys reporting on all things related to sports.
Previous Magic’s Loss Gives Chicago Playoff Boost
Next Fight For The No. 1 Seed In The East Continues To Game 82