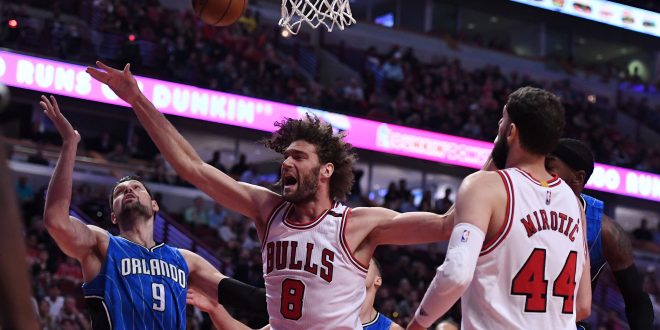 Last night’s loss in the United Center marked two major feats: the worse loss for Orlando in franchise history and a chance for Chicago to claim a playoff spot.

How the Bulls Got to the Eighth Spot

From the very first quarter, the Chicago Bulls completely dominated the court. In fact, the Magic only led once in the game–when forward Aaron Gordon’s layup went in to set the score to 2-0. After that drive, the Bulls took over the court completely. Chicago only allowed Orlando 11 more points in that quarter to end it, 34-13.

The next three quarters went like the first one. Orlando never made came within 20 points of the Bulls. The Magic only made 34.5% percent of their shots. While Chicago didn’t make more than half of their shots, they boasted a 53.9 percent at the end of the game.

"Win at all costs. At the end of the game we have to have more points.” @JimmyButler discusses Wednesday’s matchup. pic.twitter.com/NH534OlNAj

Furthermore, the Bulls outplayed the Magic in every aspect in addition to points. Chicago made 87.5 percent from the line, compared to the Magic’s 75 percent. Orlando was out-rebounded by 17 by the Bulls, who went up for a total of 54 rebounds to the Magic’s 37.

Chicago center Robin Lopez led both teams in points, with a total of 18. Lopez also led his team in rebounds with a total 8, tying with teammate Paul Zipser. Nikola Vucevic led the game in rebounds with 10. The Orlando center contributed more than just rebounds. He led the team with 14 points, along with guard Evan Fournier, who also scored 14.

Vucevic says Chicago outperformed his team because they played with that playoff spot in mind.

Other than rebounds, the only other number the Magic had higher numbers is in turnovers, when the Bulls forced 16 turnovers.

Chicago’s Short Road to Securing a Spot in the Playoffs

So the Bulls are a shoe-in for the upcoming playoffs?

Their dominating win last night did propel the Chicago Bulls to the No.8 spot in the Eastern Conference. That spot isn’t secure, though.

The Bulls have to win their final game of the season against the Brooklyn Nets Wednesday night at home. Wednesday’s game will be the fourth time the two teams have meet this season. Chicago leads the series 2-1. The two teams played Saturday in Brooklyn for Chicago’s first loss to the team by one point, 107-106.

The last game before Saturday’s between the two was just as close, when in December the Bulls won in Chicago 101-99. October’s game in Brooklyn where Chicago took the win is the only game that hasn’t been close, with the Bulls winning 118-88.

"We played a solid game and we have to have that again on Wednesday." – Coach Hoiberg

Unless the Bulls come out playing harder against the Nets than the last two games, Wednesday night’s could be a nail-biter. A loss against the Nets doesn’t mean the team is out of the playoffs, though. Chicago can lose to Brooklyn and still get the final place in the Eastern Conference lineup, as long as the the No.9 Miami Heat fall to the Wizards in their Wednesday night game. While a loss to the Wizards is a possibility, the Heat haven’t lost to the team once this season.

So win or lose Wednesday night’s game, the Bulls will still have that chance for the last playoff spot in the East. But there’s no doubt the Bulls want to have power over their own destiny, so a win is definitely the goal.

The Bulls take on the Nets Wednesday night at 8 p.m., the same time Heat face off against the Wizards.