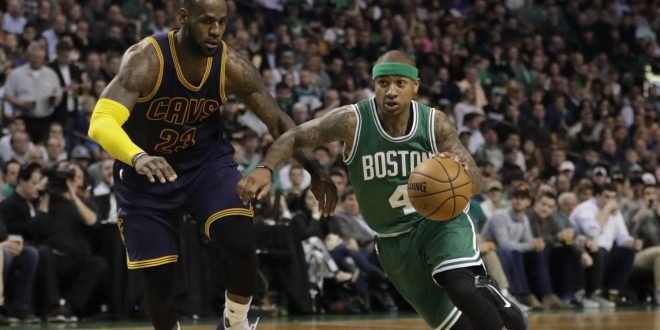 Fight For The No. 1 Seed In The East Continues To Game 82

With one game remaining in the NBA season, the eastern conference’s No. 1 seed is still up for grabs. The Boston Celtics currently sit in the one spot with a 52-29 record. The Cleveland Cavaliers, after losing their last three games, sit one spot behind with a 51-30 record. The two teams have met four times this season, with the Cavs winning three of the contests.

There are three separate scenarios that can happen on Wednesday to decide who the No. 1 overall seed in the eastern conference will be.

The reason Cleveland gets the No. 1 seed if both teams finish with the same record is because the first seeding tiebreaker in the NBA is head-to-head record. As stated before, the Cavs are 3-1 vs. the Celtics this season. The next tiebreakers are division record and conference record, but neither are applicable here.

The last 10 games for each of these two teams have been very different. The Celtics are 7-3 in that span and have won 11 of their last 15 games. In their last six games, Boston has failed to score 110 points only once, albeit, that game was a 114-91 loss to the Cavaliers.

Cleveland has gone 4-6 in their last 10 games and have lost their past three games. Most recently, the Cavaliers lost 124-121 in overtime to the Miami Heat, but rested key players in LeBron James, Kyrie Irving and Tristan Thompson.

FiveThirtyEight has given the Celtics an 85% chance of obtaining the top-seed, while giving the Cavaliers a 15% chance. Basketball Reference gives Boston a 90.2% chance and Cleveland a 9.8% shot.

Chance for the top seed in the Eastern Conference according to ESPN's Basketball Power Index:

The Cavaliers take on the Toronto Raptors on Wednesday at 8 p.m. in Cleveland. The Celtics square off against the Milwaukee Bucks at 8 p.m. in Boston.

The Toronto Raptors are currently locked into the third overall seed in the East with a 50-31 record and one game left. Even though they’re only a game ahead of the Wizards, even if Washington wins their final game and Toronto loses, because of the head-to-head matchup tiebreaker listed before, the third seed would go to Toronto.

The Milwaukee Bucks are in a battle for the fifth seed with the Atlanta Hawks. The Bucks currently trail the Hawks by half a game, as Atlanta has only played 80 games this season. The Hawks play tonight vs. Charlotte at 7:30 p.m. That game matters because if Atlanta wins, they automatically clinch the fifth-seed. If that happens, Milwaukee will more than likely rest their players in the final game of the season in preparation for the postseason. A D-League lineup will all but hand an easy victory to the Celtics.

The Celtics are 1-1 this season vs. the Bucks while the Cavaliers are 3-0 vs. the Raptors.

Sound Bites from Boston and Cleveland

Previous Kevin Durant Making His Way Back
Next Florida Panthers’ Future Uncertain, But Full of Promise