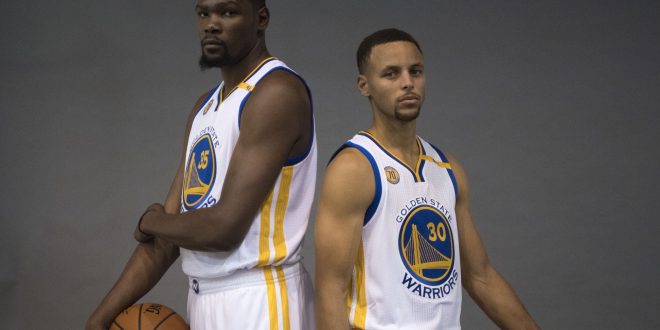 The first round of the NBA Playoffs begins tomorrow following this week’s regular season finish. The fate of the East is blurry at this point. But, many are expecting the Golden State Warriors to top the West for the third straight year. Their round one match-up against the West’s eighth seed seems like an easy road to round two. However, the Portland Trailblazers refuse to go down without a fight.

Everything to know heading into the series: https://t.co/Qb5IGOzma9 #NBA pic.twitter.com/BfpHgMf3YJ

The Golden State Warriors won the Championship in 2015. If it was not for blowing a 3-1 lead, they would have in 2016. Three-point shooter extraordinaire and unanimous MVP Stephen Curry may have lead the team, but the whole starting line-up was arguably the deepest in the NBA. This happened before Kevin Durant joined the roster with no intentions to leave it. The Warriors were touted as a “super-team” after that and their 67 wins this season back up that claim. In addition to the stellar Curry and Durant point vault, shooting guard Klay Thompson averages 22 points per game. Power forward Draymond Green averages eight rebounds and seven assists per game. It will be extremely difficult for Portland to overcome these numbers. It already has been. The Warriors are 4-0 against them this year and five does not seem out of reach.

A Portland victory will make the Trailblazers the sixth eight seed to upset a one seed in the first round. However, franchise star and point guard Damian Lillard is on fire. In his last five games, he averaged 32 points, six rebounds, and five assists. Rival point guard Curry’s last five game stats are mostly below Lillard’s, giving Portland a small boost. The head-to-head season stats also give Golden State only a slight edge over Portland. The Trailblazers are not afraid though. Lillard believes his team can beat the Warriors in six games. But, a franchise star will not be enough to overcome a franchise team. The rest of the starting lineup must step up and focus on blitzing Durant and getting in Curry’s head every game to move on.

The series between Golden State and Portland begins on Sunday at 3:30 in Oakland. Because they are the higher seed, Golden State secured home-court advantage.

Previous NBA Playoffs Preview: Bulls Battle the Celtics
Next Rays and Marlins In a Four-Game Odyssey