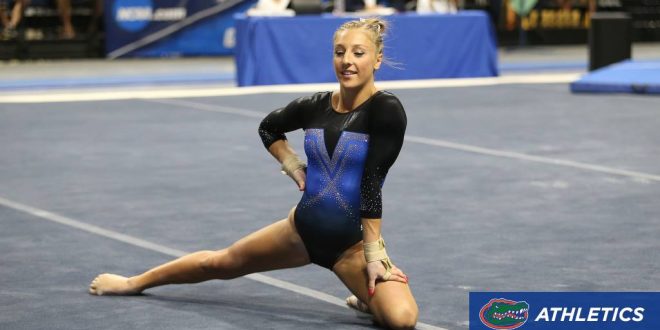 The Florida gymnastics team is advancing the to the Super Six on Saturday night at the NCAA Championships in St. Louis.  On the first night of the competition, the Gators finished in second place in session two behind LSU with a score of 197.8125 to qualify for the finals on Saturday.  Three teams from each of two individual sessions advanced to the Super Six; in Florida’s group LSU and Alabama also advanced.

The Gators are looking for their fourth national championship during Saturday’s final event.

The Gators began their first rotation on Vault and with a powerful start. Florida earned a score of 49.5125 , second highest score in history at the NCAA Championship for Florida, helping to set the tone for the team.

During the third rotation of the session, coming off a bye, Florida moved to the uneven bars. The team ran into some trouble when Kennedy Baker could not stick her landing that caused her to fall, but the team was able to pick things up with Amelia Hundley’s routine and Alex McMurtry’s flawless performance to earn her the title of uneven bars with a score of 9.9500.

Next for the Gators was the balance beam which earned them a score of 49.3875 after solid routine from the team.

Florida, coming off another bye, finished the night on floor exercise, turning in a 49.4875. The event was also led by McMurtry with a score of 9.9500. McMurtry and Baker earned All-American honors on the event.

McMurtry had one of her best performances of her life on the biggest college stage for gymnastics. The 2017 SEC Gymnast of the Year won the All-Around national championship on Friday night for the Gators with a score of 39.8125, which is the highest score in the history of the NCAA semifinals.  She also shared the uneven bars title in a terrific performance as well.

Florida will compete in the Super Six on Saturday night; the final is set to begin at 9 pm and will air on ESPNU. Joining Florida, LSU and Alabama in the finals are defending national champion Oklahoma, UCLA and Utah.

For their final meet of the season in the O’Connell Center, the No. 1 Florida …