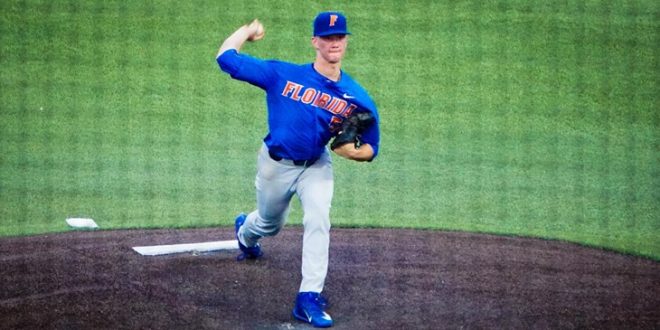 Gator Baseball Falls At Vanderbilt In Battle of Aces

It has been a series filled with contrasts between the Florida Gators and the Vanderbilt Commodores in their baseball series in Nashville.  After a thrilling 10-6 victory by the Gators from the night before, pitching dominated the second contest as Florida’s  Brady Singer and Vanderbilt’s Kyle Wright put on a show at Hawkins Field. Both pitchers had complete games, but of course, only one could get out with the victory. It went to Wright, who probably had the best game of his college career. The Commodores ended up winning 2-0 as both teams now sport 7-7 SEC records.

Two Aces On A Mission

For the first three innings, it seemed like both pitchers wanted to get out as soon as possible from the stadium. Singer and Wright displayed a rich variety of pitches. Both were solid when throwing sinkers, breaking balls and fast balls. Batters from both teams could not put much offense together.

Gator catcher Mark Kolozsvary, subbing for the injured Mike Rivera, threw out two Vandy runners trying to steal to help the Gator cause.  In the fourth inning, the Commodores loaded the bases with one out but Singer got out of trouble on a strikeout and a ground out.

Trouble In The Fifth And Seventh

The Commodores scored in the fifth inning as Jason Delay doubled and Ethan Paul singled to put runners on the corners.   Paul was thrown out at second but shortstop Connor Kaiser, the next batter, laid down a two strike squeeze bunt that scored Delay and Kaiser reached first base on a throwing error by Kolozvary.  But Singer limited the damage as he got a fly out and a fielder’s choice to get out of the inning.

In the seventh inning, Delay, Paul and Kaiser hit singles to load the bases with no one out and Jerin Kendall followed with a sacrifice fly to plate Delay but again Singer worked out of trouble with a strikeout and a fielder’s choice to end the inning.

Both aces continued their major-league-esque dominance through the rest of the game – Kevin O’Sullivan, Florida’s head coach, agrees with this statement. Wright and Singer both tossed complete game gems but Singer was the hard luck loser.  Wright was terrific for Vanderbilt, striking out 13 while Singer fanned eight in a losing cause.