On Saturday, the No. 3 Florida Gator (12-2) lacrosse team will play the Butler Bulldogs (1-13) for the first time in school history. Currently, the Gators hold a 17 game win streak against conference opponents and will look to make Butler their 18th.  A win here would clinch the Gators a spot in the Big East Tournament, with two games left remaining in the regular season.

Butler has struggled throughout the season in many different aspects in the game.  Though, notably the most prevalent is the lack of time with the ball.  Butler averages 21 turnovers a game,  ranking them 105th in the nation in that category.  With the constant turnover rate, it hinders their offensive capabilities as they only get 15 shots off per game.  With the lack of shots taken,  it gives them less opportunities to be able to score as they average 9.1 points per game.

The turnovers also effect the defense in numerous ways.  They allow the opponents to have more time with the ball and better scoring opportunities.  Butler opponent’s average approximately 17.5 goals a game.  Butler’s Goalie Haley Rayburn is the head of defense,  ranking eight in the Big East conference with six saves a game.  In order to limit damage, Butler needs to prevent turnovers throughout the game.

Rise of the Gators

The Gators have been the complete opposite, dominating most of their opponents.  Offensively, the Gators are one of the best in the nation.  They spread the ball around averaging over 7 assists per game, which is emphasized with the team having five players with over 20 goals for the season.  Senior Sammi Burgess has been a huge part of this team’s success.  Burgess has already surpassed the number of points from last year (54), having played six games less this season (60).  Amounting 27 goals and 33 assists,  Burgess is definitely one of the premier stars in the Big East conference.

The Gators defense has been spectacular for the most part this season.  They have held their twelve of their fourteen opponents to under their season’s scoring average.  Though, a big part of that is Sophomore Goalie Hayley Hicklen who has a 48.4% save percentage.  Hicklen ranks 19th in the NCAA with 9.16 g0als-against average. Facing this Butler offense, Hicklen could see very little action.

The No.3 Florida Gators will look to gain another victory against the Butler Bulldogs.  The game will be at noon this Saturday.

Previous Gator Baseball Falls At Vanderbilt In Battle of Aces
Next No. 3 Gator Softball Falls Short To No. 21 Kentucky 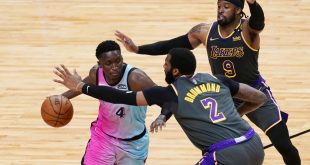 Oladipo Exits With Injury During Heat Victory Over Lakers