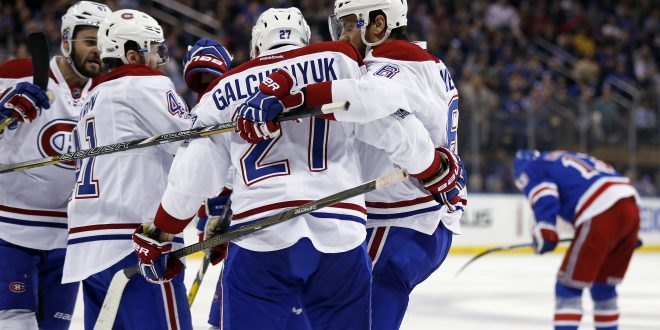 Canadiens Use Power Plays to Take Series Lead Over Rangers

The Montreal Canadiens defeated the New York Rangers 3-1 in Game 3 Sunday behind executing on power plays and a dominating performance by goaltender Carey Price. With the win, Montreal takes a 2-1 series lead. Canadiens right winger Alexander Radulov has been the driving force for Montreal taking the lead in this series. He hit the game winner in overtime of Game 2 and continued his dominance Sunday by scoring a goal in the third, that gave the Canadiens a 3-0 lead, and serving up an assist. He currently leads the series in points for both teams with five total points.

Power plays were a struggle for both teams heading into Sunday’s Game 3. Both the Rangers and Canadiens were 0-7 on converting on power play opportunities in the first two games of the series. In Game 3, Montreal turned three power play opportunities into two goals. The first coming from left winger Artturi Lehkonen with 17:37 left in the second period. The second power play goal came with 7:42 remaining in the third period, courtesy of defenseman Shea Webber. While power plays proved beneficial for the Canadiens taking the 2-1 in the series, it also proved costly for the Rangers. The Rangers went 0-3 when faced with a power play on Sunday. This led to New York suffering its sixth straight home playoff loss, a franchise record.

The Price was Right for Montreal

Game 3 was dominated by the goalies. Both Montreal’s Carey Price and New York’s Henrik Lundqvist made it difficult to get anything done offensively. In this battle of the goalies, it was Price who came out on top. Price finished the game with 20 saves on 21 shots and almost pitched a shutout. The shutout bid was spoiled by Rangers defender Brady Skjei’s first postseason goal with 2:56 remaining in the game. Lundqvist had a respectable showing, totaling 26 saves on 29 shots. However, Lundqvist and the New York defenders had a rough time defending the beautiful passing and misdirection that was on display for Montreal.

Game 4 of this Eastern Conference First Round series will be Tuesday night at Madison Square Garden. The Rangers will look for their first playoff home win since Game 1 of the 2015 Eastern Confrence Finals in Game 4. Lundqvist says the Rangers needs to give more in Game 4 to get the much needed win. The Canadiens will look to take a commanding 3-1 series lead before the series heads back to Montreal.  Puck drop on Tuesday is at 7:00 p.m.

Previous Oklahoma City Thunder Gets Blown Out In the Playoffs
Next Gator Men’s Tennis Earn No. 3 Seed in SEC Tournament