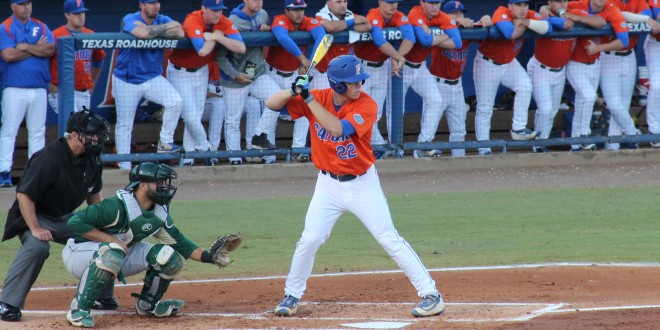 On Friday night, the Gator baseball team was down by two and had the bases loaded in the bottom of the eighth with no outs against South Carolina, but squandered the opportunity and ultimately lost the game 4-2.

When presented with the same opportunity Saturday afternoon, this time down 5-3, J.J. Schwarz came through with his biggest hit of the season.

Schwarz’s eighth inning go-ahead grand slam proved to be the game winner, propelling the Gators to a 7-5 win in the rubber match of the series against SEC East foe South Carolina. Schwarz said getting the hit was a “great feeling” and hopes it carries the Gators forward as they had down the stretch of their SEC schedule.

A late comeback capped by JJ's GRAND SLAM in the 8th. Michael Byrne with his 8th save of the season. pic.twitter.com/dDPvAfnyla

With the win, Florida improves to 27-13 overall and 10-8 in the SEC, helping them stay ahead of the Gamecocks for second place in the SEC East. South Carolina drops to 24-15 overall and 9-9 in conference play with the loss.

Garrett Milchin (3-1) earned the win after coming in relief and getting two outs on two pitches in the top of the eighth inning. Michael Byrne earned his eighth save of the season with 1-2-3 ninth inning, while Colie Bowers took the loss for South Carolina by giving up the Schwarz grand slam.

Jackson Kowar started the day on the mound for Florida and took a no-decision. He went 6.1 innings and gave up 5 earned runs on 11 hits while throwing a career-high 98 pitches.

Kowar had a shaky start to his day, as the Gamecocks jumped out to a 2-0 lead in the top of the first.

Second baseman LT Tolbert started the scoring for South Carolina with an RBI double to center field, and then came home on a ground out from Carlos Cortes to give the visitors the early two-run lead. They got to Kowar to the tune of four hits in the inning before Kowar was able to get out of it by striking out right-fielder Jacob Olson.

Florida would come back to tie it thanks to a run each in the second and third innings.

The Gators had their first bases loaded opportunity of the game in the bottom of the second after no-out singles from Ryan Larson and Nelson Maldonado and a walk from Schwarz. They could only muster one run out of the chance though as Larson came home on a double-play ground out from Christian Hicks before Keenan Bell ended the inning with another ground out.

In the third inning, again Florida could only produce one run out of a bases loaded situation. After an Austin Langworthy walk moved Dalton Guthrie to second and Deacon Liput to third, Larson, who’s been Florida’s hottest hitter as of late stepped up. A ground out was able to bring Liput home, but Maldonado grounded to second on the next at-bat to end the danger. This meant Florida had only scored two runs in their last three bases-loaded opportunities dating back to Friday night.

South Carolina re-took the lead in the fifth before Nelson Maldonado tied it up in the sixth with the first big home-run of the game. Maldonado took the one-out, full-count pitch and smashed it over the left field wall to tie the game up at 3 for Florida.

A solo shot into the LF bleachers and we're all square again.

The score didn’t hold long though, as the Gamecocks took back the momentum in the seventh.

After a Cortes bloop single to left field, Kowar left a pitch hanging high in the strike zone that catcher Chris Cullen launched over the left field wall that gave South Carolina the 5-3 lead. Kowar walked the next batter, and his day was done, as Nick Horvath came on to replace him. Horvath’s first pitch led to a 4-6-3 double play and limited the damage for the Gators.

Florida’s third bases-loaded opportunity of the game came in the eighth and that’s when the magic happened.

After a lead-off single from Langworthy, Larson and Maldonado took two of the eight Gator walks on the day. That sent Schwarz up to the plate. Schwarz waited for a fastball that he wanted, and got it, blasting his fifth home run of the season and Florida’s first grand slam since Schwarz’s big one in last year’s Super Regional against Florida State. Gator coach Kevin O’Sullivan said it was “good to a smile on his face again” and said it makes both Schwarz and the entire team feel good to see him come through like that.

FROM TWO DOWN TO TWO UP!!! OH MY!! #UseTheSchwarz

Florida will have a few days off before traveling to Athens for a weekend series against Georgia that starts on Friday.