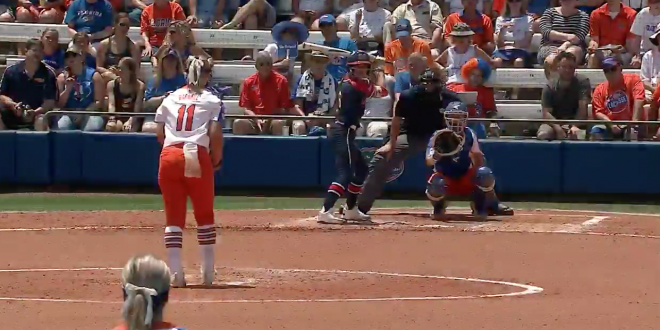 The top-ranked Florida Gator softball team (46-4) fell 5-1 on the road Sunday against the eighth-ranked Tennessee Volunteers (42-8). Despite dropping the series finale, Florida took the SEC series 2-1, with consecutive shutout wins on Friday and Saturday.

Florida hasn’t won a softball series in Knoxville since 2012.

Along with the series win, the Gators clinched their third-straight SEC regular season championship; Florida is one of three programs to accomplish this feat in three consecutive seasons.

The Gators struck first when Jordan Roberts hit a solo homer but overall the Gator offense in this game was not particularly good.  Florida had just four hits in the contest while leaving five runners on base against Tennessee pitcher Caylan Arnold (19-6).

Aleshia Ocasio (8-1) shouldered the loss for the Gators; she gave up five runs on eight hits.

After keeping the Volunteers scoreless for four innings, Ocasio gave up a grand slam to Tennessee’s Megan Geer. The fifth inning slam proved to be a momentum swing that Florida wouldn’t recover from.  The Gators threatened to score in the top of the sixth when Janell Wheaton doubled to left field, but Florida left two on to end the inning.

The Volunteers made the final score 5-1 with an unearned run from CJ McClain’s single in the bottom of the sixth.

Up next, the Gators will visit in-state rival FSU for the Fresh from Florida Sunshine Showdown. First pitch from Tallahassee is set for 7 PM on Wednesday.