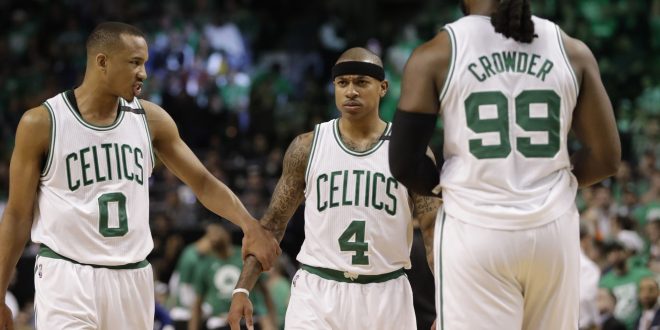 The Boston Celtics and Washington Wizards have played a total of 9 games this season. In all nine games, the home team has come away with the victory. Right now the series is in favor of the Boston Celtics as they lead three games to two over the Wizards. Although, tonight’s game 6 will be played in Washington. As the stats show, the Wizards are the favorites tonight with home court advantage as they look to force a game 7 in Boston.

On Wednesday night, the Boston Celtics beat the Wizards by a staggering 22 points. An impressive performance from Avery Bradley helped the Celtics go on a 16 point run in the first quarter. Bradley scored 25 of his total 29 points in the first half of the game. That was double of what he scored in both games 3 and 4 combined. Isaiah Thomas remained the main focus of Washington’s defense as he is Boston’s leading scorer in this postseason. This allowed several other Celtics to score and lead their team to a distinctive victory. Former Florida Gator Al Horford scored 19 points and provided 7 assists. Jae Crowder scored 18 points, as did Isaiah Thomas. The Celtics shot 53% from the field and just over 50% from behind the three point line.

Hear from the Celtics on their attempt to close out the Wizards tonight in Game 6 in Washington. pic.twitter.com/9FBFICG2DA

Washington Wizards head coach Scott Brooks told ESPN that they were outplayed in game 5. Brooks said “everyone knows that once you make the easy shots, the next shots become easier.” The Wizards know they have to find their tempo again tonight in order to win as the Wizards “didn’t have the focus” going into game 5 on Wednesday. The Wizards shot only 38% from the field and only scored 7 out of 29 threes in game 5. Right there you can see how the Celtics won game 5 by 21 points. John Wall said “I don’t think we relaxed, I think they kinda surprised us. They killed us in the first quarter.” If the Celtics get in that rhythm again, it will surely be tough for the Wizards to win, even if it is at home.