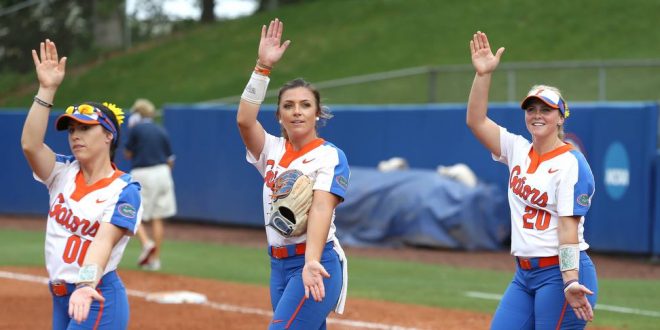 The Florida softball team opens NCAA Regional play at home with a rain delayed 9-0 win over Florida A&M on Friday.

The #Gators start NCAA Regional play with a 9-0 win over FAMU in 5 Innings behind Delanie Gourley's no hitter & an explosive offensive day! pic.twitter.com/4iJfKLL6Qo

Delanie Gourley (19-4) started in the circle for the Gators after a rain delay and pitched the program’s second ever post-season no-hitter in the opening round of the NCAA Gainesville Regional.  And the Gator offense helped Gourley right away.

Amanda Lorenz hit her 10th homer of the year in the first inning to give the Gators a 1-0 lead.  In the third, the Gator bats produced seven runs with just five hits.  Here’s how it all played out.

Florida then added another run during the bottom of the fourth inning when Jordan Roberts doubled to left center field allowing pinch runner Jacqui Switzer to score.

Gator coach Tim Walton talked after the game about the rain delay, the team’s offense and tomorrow’s competition.