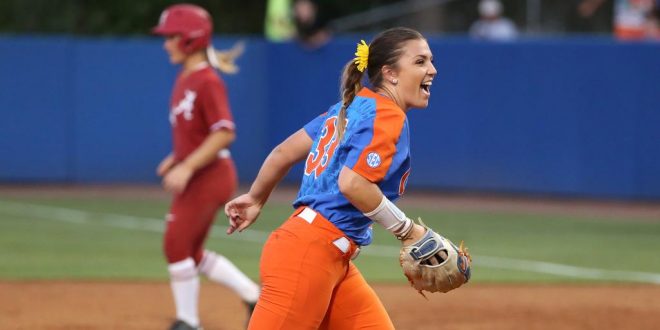 Delanie Gourley only needed a couple of runs from the offense to set the tone and once again it was up to the senior’s performance whether Florida would play a Game 3.

The starter for Friday’s game was able to extend Florida’s season in Game 2 and completed her 12th shutout of the season.

Gourley gave up four hits with eight strikeouts and managed to lower her ERA to 0.68.

During the top of the third inning, Justine McLean broke up the no-hitter as she recorded a single bunt with two outs to give the Gators the first hit of the game. With McLean at first, Amanda Lorenz hit a home run to give Florida a 2-0 lead.

Lorenz is now 4-for-6 with one run scored, two RBI, two walks and a home run in the Super Regional.

With Lorenz’s homer, Alabama’s scoreless inning streak in the postseason came to an end as Sidney Littlejohn was no match for the Gator offense.

The winner of the game will advance to the NCAA Women’s College World Series in Oklahoma City. You can catch coverage of Game 3 on ESPN starting at 5 p.m.

An early deficit did not shut down the Gators Softball team against Texas A&M. With …