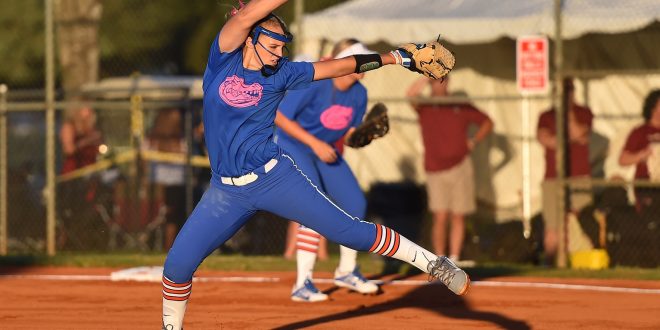 It was quite a year for Florida sophomore softball pitcher Kelly Barnhill and because of it, she was honored as the USA Softball Collegiate Player of the Year. She becomes just the second Gator ever to be given this award and just the second sophomore ever to win it.

Against Top 25 opponents, Barnhill won 14 times with nine shutout performances.  Over the course of the year, she had scoreless inning streaks of 45.2 and 51.0 innings, higher than any other streak from the pitching staff. Barnhill also struck out the side 48 times.

Lauren Haeger was the other Gator to win the award back in 2015. She was also dominant in the circle.

Haeger made a more day to day impact on the team with her bat as she hit 17 home runs and drove in 71 runners. She anchored the Gators to their second title in 2015 and Barnhill hopes to get Florida its third with her performance in the circle.

The Florida Gators begin the Women’s College World Series on Thursday against Texas A&M. First pitch is at noon.b