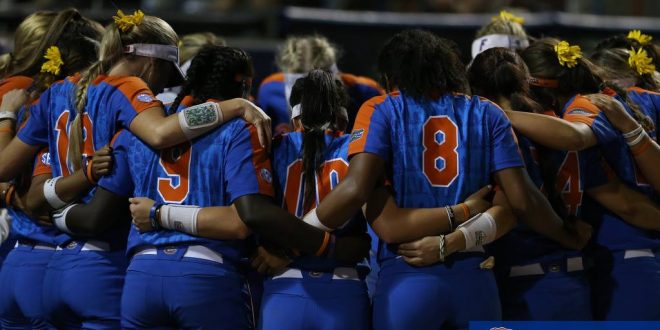 The Florida Gator softball team lost to the Oklahoma Sooners in Game 2 of the Women’s College World Series Championship, 5-4. After losing a 17-inning game on Monday night, the Gators were not able to prevent the Sooners from winning another title.

Aleshia Ocasio started in the circle for Florida with Jaimie Hoover starting at third base. The first batter that Ocasio faced, Nicole Mendes, took her deep to left field to get Oklahoma on the board.

Florida responded with a home run of their own from Sophia Reynoso in the top half of the second.

So that's how it's going to be…

Sophia Reynoso responds with a BLAST of her own! pic.twitter.com/DP3YI9UYHK

After two quick outs after Reynoso’s home run, Florida would pick up some more runs. Justine McLean singled and advanced to second on a fielding error. Oklahoma would then intentionally walk Amanda Lorenz. Then, with Nicole DeWitt up to the plate, she singles to left-center field to load the bases for Ocasio.

The junior would single to right center field and McLean added a run for the Gators. Up next, Kayli Kvistad was hit by a pitch letting Lorenz walk home from third. Florida leads the Sooners, 3-1.

Delanie Gourley would relieve Ocasio in the bottom of the second with bases loaded. Gourley walked Caleigh Clifton, making the game 3-2. The next batter up, Shay Knighten, would clear the bases with a double to give the Sooners a 5-3 lead.

Florida quickly answered in the top half of the third with a Chelsea Herndon solo home run.

In the sixth inning, Florida pushed a runner into scoring position following a leadoff single, but could not score.

Oklahoma brought out ace Paige Lowary to finish the game.

What a memorable 2017 #WCWS Championship Series.

In the history of their program, Florida has not been able to win the championship series after losing Game 1. In 2009, Washington beat them 8-0 to start off the series and then finished them off in Game 2, 3-2.

Previous Basketball’s Best Duos
Next Can The Cavs Come Back In Game 3?